How to Make a Quick Christmas Plum Cake 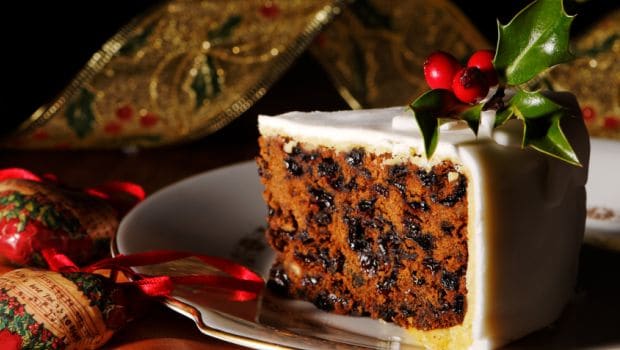 Highlights
When it comes to Christmas festivities nothing can replace the need for a classic plum cake. This Christmas learn the legend behind this Xmas special and how to make one in the comfort of your kitchen.

The traditional Christmas cake is one of my first memories of Christmas and one of the most endearing memories of school (Don Bosco Chennai), on the last day before Christmas vacation officially began. We used to return home with a slice of rich plum cake that mysteriously shrunk on the way back from school. What began essentially as a Christmas memory in Kindergarten became a regular fixation as soon as I discovered the simple pleasures of a plum cake at the neighbourhood bakery. Most bakeries in Kerala do a stellar job. These childhood memories were rekindled when I was invited for my first 'cake mixing ceremony', that became commonplace in Indian luxury hotels by the end of the last decade, and now an integral part of most hotel PR calendars.

The Traditions of the Christmas Cake

Most Christmas cake traditions point in the direction of the UK. There's one common reference to the plum porridge that predates the plum pudding and cake. It was usually what people ate on Christmas Eve (and not Christmas day itself) and was a fasting meal in preparation of Christmas festivities. This morphed into the first avatar of Christmas Pudding with dried fruits and spices. The oatmeal made way for butter, flour and eggs by the 16th Century laying the foundations for the Christmas cake as we know it today. The spices helped preserve the cake and most people still boiled the cake; only the rich could afford ovens at that time.

The first recipes of the plum pudding began to emerge about 300 years back. One of the British expats I met at a cake mixing ceremony in Chennai was quite overwhelmed at the number of cake mixing events at hotels in India. She told me about 'Stir-up Sunday' in the UK, the last Sunday before the season of Advent, typically in the last week of November and a month ahead of Christmas. This is the day when families in England get together to mix their cake.

The Myths and Superstitions

It's still customary for all family members to have a go at the Christmas cake mix in an 'East to West direction' in honour of the three kings (three wise men) who visited infant Jesus. The spices in the mix - from the Orient, were also supposed to honour these three kings. The other legend one hears about is the 13 ingredients in the mix that are supposed to symbolise Jesus and his twelve disciples. It's still customary for some families to slip in a silver coin or two - for good luck, into the cake mix. I've seen this practice followed at some of the cake mixing ceremonies too. Blame it on the occasional visit to the dentist but quite a few families in the UK have discontinued the tradition of dropping coins into the mix.

Quite a few British royals have been linked with the Christmas pudding and it has been immortalised in tales like Charles Dickens' Christmas Carol. However it was King George I - you can still find the recipe for King George's Plum pudding, who is supposed to have popularised the plum pudding in the 18th Century. The puddings back then combined dry fruits with minced meat and suet (a form of animal fat); they were also called bag puddings because they used to be hung in a cloth and boiled. The Twelfth Night (after Christmas) cake, with dried fruits and nuts, was the other precursor to the modern day plum cake. It used to be leavened by yeast during the medieval periods and also featured hidden charms before eventually being replaced by the Christmas cake during the Victorian era.

The Plum Pudding Without Plums

It might be an oddity but the plum pudding has never been made with fresh plums. Back in the 17th Century, plums also referred to raisins and prunes and hence the name plum pudding. The Christmas cake mix is typically done a month ahead. Dried fruits like sultanas and prunes are soaked in liquor (usually brandy or rum) and then added to the cake mix along with the flour and eggs when the cake is baked. Plum pudding is generally moister and served warm - tastes best with a warm custard sauce (you can even try with regular vanilla custard). A traditional plum pudding was always made with suet but most patisseries in India don't use suet. Plum cake tends to be drier and boasts of a much longer shelf life.

Chefs and passionate bakers I've spoken to over the years recommend a 1:1 (dried fruits: liquor) ratio and also recommend that the nuts are not added to the mix. They suggest adding the nuts along with the flour since the nuts can't absorb the flavours the way the dried fruits do. The key is to ensure that every bite of the cake has a large quantity of nuts and fruits; they don't call it rich plum cake for nothing! You can add a marzipan icing to the plum cake - many Christian homes in South India do this.

If you still want to bake a plum cake in time for Christmas, try this relatively easy recipe (you still need to soak the Christmas mix for a day though).

1. The Christmas mixture: mix the dried fruits and nuts (you could add the nuts at a later stage) with the rum/brandy and orange juice and leave it closed for at least 24 hours. You can reduce the alcohol content based on your preference.

2. Beat butter and sugar until fluffy around 10 minutes.

3. Add the eggs and vanilla essence, and mix for 1 minute.

5. Add Christmas mixture and mix properly. Put the mixture in the ring mould, and bake in a pre-heated oven at 180 degree C for 40 to 45 minutes.