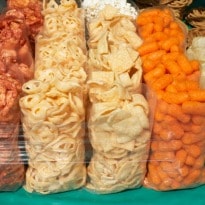 In a temporary reprieve to MNCs, the Himachal Pradesh High Court Monday stayed the government order imposing a ban on potato chips and candies packaged in polythene.

Hearing a bunch of petitions, a division bench of Justice D.D. Sud and Justice Sanjay Karol stayed till Sep 3 the ban, which came into force in the state from Monday.

The government issued a notification June 26, banning sale and stocking of 25 food items, including chips and biscuits, which are available in plastic and non-biodegradable packs.

The government's notification came in the wake of the high court order Jan 10 that directed the government to ban the items packed in plastic packaging from April 1.

But later on the request of the state government, the court had extended the time limit to implement the orders by three months.

The government pleaded that additional time was required to evaluate the possible consequences that may arise as a result of the ban.

As per the court's earlier order, eatables like potato chips, cookies, candy, chewing gum, ice cream, chocolates and noodles would not be available in polythene packs.

Essential items like milk and vegetable oils are, however, exempted from the ban.

The ban is likely to have wider ramifications as scores of MNCs, which sell such eatables, will be impacted, say government officials.

"It is not that 100 percent biodegradable and compostable plastic and packaging material is not available in the market. It may increase the cost of the product. But then people indulging in the luxury of consumption of such consumable items, edible or otherwise, need to share the burden of costs," the court had said.The court, say legal experts, believes the price rise will be a deterrent for voluminous consumption of junk food, including aerated beverages, which contain a high concentration of synthetic sugars.

"We are of the opinion that there should be a ban on only those non-essential items which fall in the category of junk food such as wafers, sweets, noodles, chocolates, ice cream candy, biscuits and 'namkeen'," the court had said.

CommentsIt had added: "We also make it clear that if we find that this experiment is successful, then we may expand the scope of this order to cover other non-essential items also."