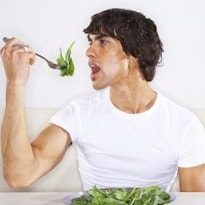 Lack of folate, found in green veg, can cause abnormalities in babies, so women planning pregnancy are advised to take a supplement. Should fathers follow suit?

Finally it is the turn of prospective fathers to be told what to eat - men who want to be dads should ramp up their intake of green vegetables and cut out junk food. A study published in Nature Communications found that fathers with a diet deficient in folate (found in greens such as spinach, sprouts and broccoli) were more likely to have offspring with abnormalities of the head, face and sternum (breastbone) and a buildup of fluid on the brain.

The researchers linked their findings to changes in regions of sperm DNA that are altered by folate. They also found chemical changes in the DNA of genes associated with the development of chronic diseases such as diabetes and cancer. But before you start storming the vegetable aisle - the study wasn't conducted on humans. The folate-deficient fathers were mice. And although their poor mouslings had nearly 10 times as many abnormalities as those with daddy mice who had eaten their greens, there is no evidence that men who are folate deficient do any harm to their offspring. But while there is no proven link, might such a study make you think twice before refusing that extra helping of sprouts?

The role of folate deficiency in causing a baby's brain or spine to develop abnormally (for example in spina bifida, in which the spinal column doesn't close properly) is well known and is why women are advised to take a daily folate supplement of 400 micrograms if planning to get pregnant. The brain and spinal cord form in the first few weeks so it is better to have some folate on board before you conceive. The authors of the study say that the changes they found were specifically in the sperm epigenome - the chemical compounds that tell the genes which proteins to make and which to switch off. This effect, they say, means that the diet of men may be as important as that of women in the months before conception.

But mice, while sharing most of their genes with humans (out of 4,000 studied, less than 10 are found in one species and not the other), are not interchangeable with humans, though there have been some major medical advances from mice models, such as the finding of a treatment for an acute type of leukemia.

A study in 2001 in the journal Fertility and Sterility found low levels of folic acid in men were linked with low sperm counts and less active sperm. So while the evidence is not staggering, it makes sense to eat a healthy diet and avoid anything that damages the DNA you are planning to pass on to the next generation.