Drinking Young Might Lead to Alcohol Addiction in the Future 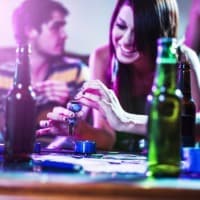 The subject of alcohol and binge-drinking is common with most teenagers. A few of them walk the fine line between drinking and binge drinking while many others try alcohol a couple of times and don't look back.

A new study that appeared in the 'Journal of Epidemiology and Community Health' claims that the the number of male teenagers who drink has tripled in India, especially those living in urban cities and poorer households.

The team questioned 2,000 men between the age group of 20 - 49 that belonged to rural and urban areas of North Goa. They were asked to reveal the age at which they first started to drink alcohol, how much they drank, and whether they had sustained any injuries as a result of their drinking. Levels of psychological distress were also assessed using a validated questionnaire (GHQ).

Researchers found that men who took up drinking as teenagers were more than twice as likely to be distressed and alcohol dependent in the future. These men were also three times more likely to have sustained injuries as a result of their drinking.

Studies from high-income countries have shown that drinking early in life is a consistent predictor of alcohol-related issues in the future, such as: greater likelihood of developing lifetime alcohol dependence, hazardous or harmful drinking, alcohol related injuries and psychological distress in adulthood. "But whether this association also exists in low and middle-income countries, such as India, was not clear" said researchers."Alcohol consumption and its harmful effects are emerging as a major public health problem in India and the trend is alarming," said Pillai.

The findings highlighted the importance of generating public awareness about the hazards of  consuming alcohol early in life and stressed on the need for enforcing regulations to limit underage drinking.