Eating berries, chocolate may protect you from diabetes 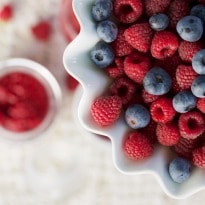 They found that those who consumed plenty of anthocyanins and flavones had lower insulin resistance.

"High insulin resistance is associated with type 2 diabetes, so what we are seeing is that people who eat foods rich in these two compounds - such as berries, herbs, red grapes, wine - are less likely to develop the disease," said Aedin Cassidy from UEA's Norwich Medical School.

Those who had anthocyanins in great quantity were least likely to suffer chronic inflammation - which is associated with many of today's most pressing health concerns including diabetes, obesity, cardiovascular disease and cancer, she added.

Promoted
Listen to the latest songs, only on JioSaavn.com
"Those who consumed the most flavone compounds had improved levels of a protein (adiponectin) which helps regulate a number of metabolic processes including glucose levels," said Cassidy.

What we do not yet know is exactly how much of these compounds are necessary to potentially reduce the risk of type 2 diabetes, she added.