Eating Out Can Lead to Higher Calorie Consumption: Study 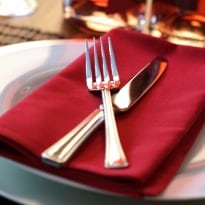 A new study at the American Cancer Society adds weight to the pre-established notion of restaurant eating being hazardous to health. Researchers have unearthed how eating at restaurants can be linked to higher daily total energy intake and poorer dietary indicators. According to the research, on occasions when people ate out at restaurants or fast food joints, they ended up consuming 200 extra calories.

The data of this study was collated after conducting a research on more than 12,000 respondents between the ages 20 and 64 who took part in the National Health and Nutrition Examination Survey 2003.

Listen to the latest songs, only on JioSaavn.com
The study was published in an online journal, 'Public Health Nutrition' and established the fact that on days when eating at a fast-food restaurant, there was a net increase of total energy intake (194.49 kcal), saturated fat (3.48 g), sugar (3.95 g) and sodium (296.38 mg).Eating at a full-service restaurant was also associated with an energy intake (205.21 kcal), and with higher intake of saturated fat (2.52 g) and sodium (451.06 mg).