Fighting to Make Safe Food and Water a Fundamental Right 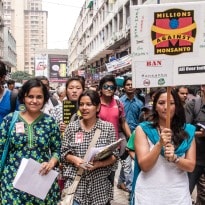 On the eve of World Food Day, a group working for safe food promotion has written an open letter to Agriculture Minister Sharad Pawar seeking his support to make safe food and drinking water a fundamental right of every citizen of India.

World Food Day is celebrated every year on Oct 16 and this year the theme is 'sustainable food systems for security and nutrition.'

"The 2011 global hunger index report ranked India 15th among leading countries with hunger situation. About 25 percent of the world's hungry population resides in India and 42 percent children in our country are undernourished while 18 percent do not have access to safe drinking water," said Rachna Arora of Public Awareness on Genetically Modified Foods.

"Although the World Food Summit and the Millennium Development Goals observe the importance of food, they have failed to recognize access to safe food as a legal right. The Indian government could set a precedence for other developing countries to follow," added Arora.

On Oct 12, the group organized a protest march against Monsanto India Limited, its associates and subsidiaries asking them to wind up their business and operations in India for unethical promotion of dangerous foods.

Comments"Consumer interests are not being protected. Genetically modified (GM) organisms are being sold openly without our knowledge. None of the imported processed food products containing GM corn are labeled. What makes it worse is these products like Kelloggs Corn Flakes are made very attractive to children through unethical advertisements," said Shalini Venugopal, an organizer of the march.
For the latest food news, health tips and recipes, like us on Facebook or follow us on Twitter and YouTube.
Tags:  MonsantoGenetically Modified