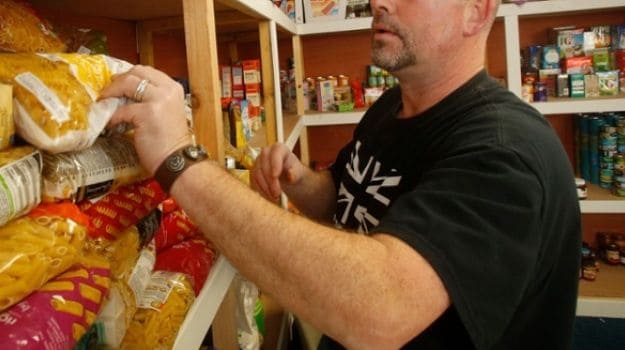 Austerity policies such as cuts to welfare and local services are driving the rapid spread of food banks in the UK, according to an academic study.

The Oxford University research shows emergency food aid is most concentrated in areas where there are high levels of joblessness and benefit sanctions.

The Conservative-Liberal Democrat coalition persistently refused to acknowledge a link between its economic and social security policies and the explosion in food banks.

But the Oxford study, published in the British Medical Journal, shows demand for food parcels is strongest where poverty is accompanied by restrictions on, and reductions in, social assistance.

There were stark variations between local areas, from a low of less than 0.1 food parcels per 100 people in Lichfield, Staffordshire, to a high of eight parcels per 100 in Newcastle-upon-Tyne.

These in part reflected the fact that some areas had more or longer-established food banks, the study found.

Even taking this into account, higher rates of food parcel distribution were still “significantly associated” with welfare cuts and austerity measures.

In particular, the prevalence in an area of benefit sanctions – where unemployed claimants who do not meet jobcentre rules have their payments stopped for at least four weeks – was a strong indicator of food parcel use.

The study says: “The rise in food bank use is … concentrated in communities where more people are experiencing benefit sanctions.

“Food parcel distribution is higher in areas where food banks are more common and better established, but our data also show that the local authorities with greater rates of sanctions and austerity are experiencing greater rates of people seeking emergency food assistance.”

A spokesperson for the Department for Work and Pensions said: “The government spends £94bn a year on working-age benefits and provides a wide range of advice and assistance for anyone in need of additional support.

“The vast majority of benefits are processed on time with improvements being made year on year and the number of sanctions has actually gone down.”

The lead author of the study, Rachel Loopstra, said it was likely to have “underestimated the true burden of food insecurity in the UK” because food aid provision is patchy and data collection is relatively crude.

She called for further research to capture the full extent of food insecurity and food bank use in the UK. One of the last acts of the coalition was to reject a cross-party call for the government to collect robust data on food poverty.

The study is the latest in a string of separate reports linking welfare reform to food bank use, from poverty charities, churches, MPs, and food banks.

A volunteer organises shelves at a food bank. Research shows welfare reductions are linked to an increase in their use. Photograph: Danny Lawson/PA