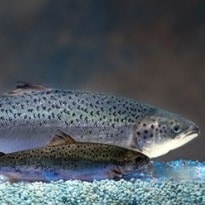 The Obama administration has stalled for more than four years on deciding whether to approve a fast-growing salmon that would be the first genetically modified animal approved for human consumption.

During that time, opponents of the technology have taken advantage of increasing consumer concern about genetically modified foods and urged several major retailers not to sell it. So far, two of the nation's biggest grocers, Safeway and Kroger, have pledged to keep the salmon off their shelves if it is approved.

Proponents of genetically engineered fish and meat say they expect Food and Drug Administration approval of the salmon and still hope to find a market for it. However, the retailers' caution and lengthy regulatory delays have made investors skittish.

"The FDA delay has caused developers to take a pause," says Dr. David Edwards of the Biotechnology Industry Organization, the main industry group for genetically engineered agriculture. "They're not really sure where to go as far as the regulatory system."

By altering genetic materials of animals, scientists have proposed -- and in some cases actually created -- animals that would be bred to be free of diseases, be cleaner in their environment or grow more efficiently. Think chickens bred to resist avian flu, "Enviropigs" whose manure doesn't pollute as much or cattle bred without horns so they don't have to be taken off during slaughter.

But where the scientists see huge opportunity, critics see a food supply put at risk. They say modified organisms can escape into the wild or mingle with native species, with unknown effects. "These are fundamental questions we have to ask of society," says Lisa Archer of Friends of the Earth, an advocacy group that has lobbied retailers not to sell the modified salmon and urged consumers not to eat it. "Where is all of this going to end up? Where do we draw the line? Let's look at the full implications and the full costs."

There is no evidence that the foods would be unsafe, but for some it is an ethical issue. Archer says people have a greater "visceral response" to eating modified fish and meat than they do engineered crops, which are already fully integrated into the food supply.

The FDA said in 2010 that the modified salmon appears to be safe to eat and then in 2012 that it is unlikely to harm the environment. But an FDA spokeswoman said "it is not possible to predict a timeline for when a decision will be made."

Ron Stotish, AquaBounty's CEO, says the company has already spent $77 million on its AquaAdvantage salmon, which has an added growth hormone from the Pacific Chinook salmon that allows it to grow faster. AquaBounty executives say there are several safeguards designed to prevent the fish from escaping and breeding with wild salmon. Still, opponents call it "Frankenfish" and say not enough is known about it.

Given AquaBounty's long road, other projects have remained on the shelf or moved to other countries. James Murray, a professor of animal sciences at the University of California at Davis, has genetically modified goats that produce milk designed to fight childhood diarrhea in poor nations. He moved his project to Brazil, where he says the regulatory environment is friendlier and the government is funding some of his research.

The FDA won't say how many applications are in line behind the salmon.

Canadian researchers, meanwhile, have said they won't pursue the "Enviropig" in the United States after investors raised concerns about the length of the FDA review process. "You can't get funding in this country because you can't get regulation," Murray says.

If the salmon are approved, it still would take about two years to get them to market -- if anyone will sell them. Although some of the biggest grocery chains have pledged not to, one major retailer has not weighed in -- Wal-Mart, the nation's largest grocer. Opponents are aggressively lobbying the company to keep it off its shelves.

The fish is not expected to be labeled as genetically modified under FDA guidelines, so if retailers do sell it, consumers wouldn't know if they are buying it.

Promoted
Listen to the latest songs, only on JioSaavn.com
AquaBounty's CEO says he's holding out hope for approval. "We believe that if we're given a fair chance the marketplace is the place to evaluate this," Stotish says. "If the product were available I think people could choose for themselves."