Google Doodle for Rio Olympics 2016: These Fruit Games Are Addictive 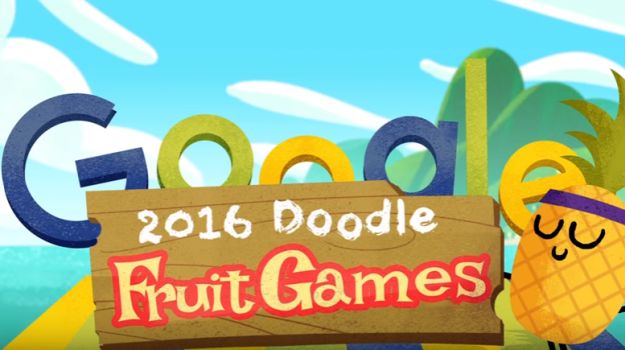 Today’s Google Doodle marks the beginning of the Rio Olympics 2016 (starting on 5th August), with Google’s very own ‘Fruit Games’.

We did expect Google to put up an interesting doodle for the Rio Olympics, like they always do. This time however, things got way more engaging and fun. Not only does the Google doodle feature a cool video wherein colourful fruits can be seen racing and competing with much enthusiasm; but Google is also introducing an app of 7 fruity games for iOS and Android. Fruits will compete with each other in different sports, think: water polo, biking, swimming, tennis, et al. According to Google, “For the next couple of weeks, we’ll journey to an otherwise unassuming fruit stand in Rio, where produce from all over the market competes for the title of freshest fruit”.

To entertain the fans even more, Google recently introduced ‘enhanced features’ for Google Search, YouTube, and Google Maps to give users a taste of what it’s like to be in Rio de Janeiro. As the city gears up for the 31st summer Olympic games and the first ever in South America, Google has enabled users to receive alerts and updates for top events and medal wins to keep them in the loop. The opening ceremony at Maracanã Stadium is expected to be attended by over 50,000 spectators, while more than 3 billion will view it visually. Over 11,000 athletes and dozens of heads of state are expected to participate.

The Google Doodle starts with a pineapple whistling off the start of the games and leads into an earnest strawberry dashing away to the finish line while a coconut pedals away with all its might… It’s like a cornucopia of conquests!

CommentsThe video also explains the concepts behind the Google fruit games and showcases various levels inside it. Love the idea? It’s time to your grab your phone and get playing. Pause your chase on Pokémon Go, because these fruit games are only be available for the next two weeks (till 21st August 2016).