In a video shared by Karisma Kapoor, Kareena can be seen all smiles next to her birthday cake. 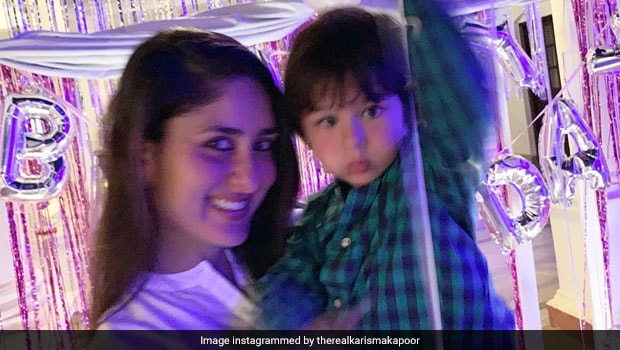 Kareena Kapoor Khan is ringing in her 39th birthday today. The 'Veerey Di Wedding' actor celebrated her special day with husband Saif Ali Khan, sister Karisma Kapoor and little Taimur Ali Khan. Like previous year, Kareena Kapoor's birthday celebrations were a low-key affair this time around too, the pictures that have surfaced online feature Kapoor's family and few close friends. In a video shared by Karisma Kapoor, Kareena can be seen all smiles next to her birthday cake(s). Clad in a white shalwar kameez, Kareena cut two birthday cakes for the special occasion, one was a simple but decadent chocolate cake, the other was topped with a mix of macarons, an inverted wine glass, flowers and sweet nibbles. One can also see Saif singing Happy Birthday for his loving wife behind. In another photo that is doing the rounds on internet, Kareena can be seen holding a glass of wine or cocktail. The private celebration took place at Saif Ali Khan's ancestral palace in Pataudi, near Delhi.

Kareena Kapoor is currently judging Dance India Dance, she also has her hands full with multiple Bollywood and radio projects. Kareena would be seen sharing screen space with Akshay Kumar and Diljit Dosanjh in 'Good News'. The film reportedly deals with the issue of surrogacy and is helmed by debutant director Raj Mehta. 'Good News' also stars Kiara Advani in lead, and is set to release in December this year. Here's wishing the actress a very Happy Birthday!