How to Cook the Perfect Crepes 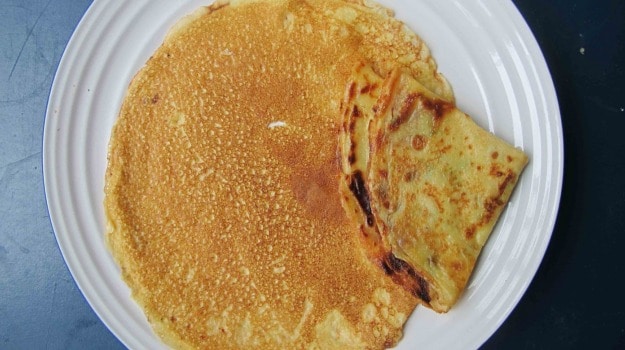 Wheat, buckwheat or chestnut flour? Milk, double cream or beer in the batter? Do they need any flavourings - and what do you dollop on top?

The crepe says a lot about the difference between France and the UK - in the popular imagination, at least. Though a close relative of the ordinary British pancake, with the same ancient roots, it has evolved into a slimmer, more elegant, more luxurious dish altogether - rich in cream and alcohol, with edges as thin as chantilly lace. It makes our own plainer, homelier kind look like the unsophisticated country cousin. There will always be a place for that dear familiar cousin at my table; the fancy crepe will never displace a pile of pancakes, soft and ever-so-slightly doughy, crunchy with tart, lemon-soaked sugar, as the crowning glory of my Shrove Tuesday supper - but they might well become the appetite-whetter.

I prefer the crisper crepe in a savoury context, and it is undeniably better suited to fancier preparations, where lightness and richness are desirable. But without one of those special hot plates and a tiny paddle, how do you make crepes to rival those dispensed from tiny, cramped stands at any French fair or market?

Plain wheat flour is the most popular choice, although buckwheat flour is a common alternative, especially in Brittany, the home of the savoury galette bretonne, and Caroline Conran gives a recipe for crepes made with chestnut flour in her award-winning Sud de France. Both the recipes I try use equal parts wheat and alternative flours, presumably because, as Conran observes, even with this mixture "they are not as light as pancakes made with white flour". Indeed, both are the heaviest I make, though they do have an interesting flavour - the buckwheat slightly bitter and earthy, the chestnut sweeter and nuttier. Both are available from health-food shops and are well worth a try if you're feeling adventurous.

Ruth van Waerebeek's book The Taste of Belgium offers a yeasted buckwheat pancake recipe from her grandmother Marie that, although it is puffy and slightly risen rather than wafer thin, deserves a special mention. It is like a cross between a crepe and a crumpet, and I love the idea of wrapping them around cheesy, creamy endives, as she suggests.

Everyone uses eggs in their batter (though Julia Child goes yolk only), but the other liquids are a matter of debate. Plainest of all is Child, who uses equal parts milk and water - which would even seem parsimonious for a British pancake, and hardly in the spirit of Fat Tuesday.

Michel Roux demands that the milk should be brought to the boil, then allowed to cool before use for reasons I'm not entirely clear about - this is suggested in breadmaking, apparently because it stops the whey proteins in the milk hampering the bread's rise, but here, with an unleavened pancake, it doesn't seem to make any sense (or difference). Roux, however, has 70 years' experience and a batch of Michelin stars, so if anyone can shed any light on the matter, please do.

I can, however, understand why he also uses double cream in the batter for his crepes in The Essence of French Cooking. It makes them meltingly rich and soft, and just as luxurious as you would hope for from such a dish. However, I prefer the flavour of the butter used by Child, Paula Wolfert's The Cooking of South-West France, Richard Olney's The French Menu Cookbook and Van Waerebeek.

Though Olney calls for milk in his master recipe, his introduction intrigues me: "It is not necessary to remain terribly loyal to precise ingredients or measurements. Crepes are good made with milk or beer." I take him at his word, and he's right; the beer makes them wonderfully light and lacy, and adds a subtle malty flavour. I like it in his sweet pancakes, but it would be truly superb in a savoury context.

I find many of the batters far too thick - they are difficult to spread around the pan, which means the results are somewhat lumpen. Olney, Child and Roux all have the right idea: a crepe batter should be the consistency of single, rather than double, cream.

Sugar is, of course, a must in a sweet crepe, balanced with just a pinch of salt. Most recipes I try also add a little alcohol. Child suggests orange liqueur, rum or brandy, the last also endorsed by Pierre Koffman's Memories of Gascony, in the form of armagnac, and by Olney in the form of cognac. Roux goes for curacao (he is making crepes suzette, after all) and Wolfert uses Pernod. This last is the only flavour I would strongly counsel against; although I'm keen enough on a milky glass of pastis on a warm evening, the aniseed is overpowering in this context. Wolfert and Conran use orange flower water in their crepes, with the former also adding lemon zest and almond extract. They are all great ideas, depending on what you're serving with the crepes, though none are strictly necessary.

Child insists you use a food processor to whiz up your ingredients, presumably to ensure a silky-smooth consistency, and Wolfert confides that "the secret of these farmhouse crepes is to strain the batter so that it is perfectly smooth". I have a very hard time getting her batter through my sieve, and conclude that it is easier, and creates less washing up, if you give the batter a good and thorough whisk, as everyone else suggests. Don't overdo it, though - once it's smooth, leave it be, or you'll encourage gluten formation, which will make them tough.

Olney does away with the usual resting time for the batter, which ranges from an hour (Conran, Roux, Van Waerebeek) to three (Wolfert), explaining: "I do not find it essential to let the batter stand before cooking, but this may of course be done." He's right; it's not essential, but it does seem to make them smoother - according to Harold McGee, "an hour or more allow[s] the proteins and damaged starch to absorb water and air bubbles to rise and escape".

Cook them in a hot pan - butter is my preferred medium, but you could use Wolfert's goose fat in a savoury context if you prefer, or oil (or clarified butter) if you're making a lot and are worried about the butter burning. Toppings I generously leave up to you - from Coran's delectable-sounding rum and chestnut cream to Roux's orange sauce or Olney's fines herbes, it's all a matter of taste.

The method for both is the same. Sift the flour into a bowl and whisk with the sugar, if using, and salt. Make a well in the middle and whisk in half the eggs, followed by half the milk or beer. Add the remaining eggs and liquid, then stir in the melted butter and brandy and other flavourings, if using. The mixture should be the consistency of single cream - if it's too thick, stir in a little more milk or beer. Cover and leave to stand for at least an hour, although longer won't hurt. Give it a good whisk to recombine before cooking.

Set a small frying pan over a medium-high heat and grease thoroughly with butter, tipping out the excess for the next one. Test with a little batter - it should sizzle as it hits the pan. Once it does, pour in a half ladleful of batter (or adjust to fit the size of your pan - the first crepe will always be a test one) and quickly tilt the pan to cover the base, tipping any excess back into the bowl.

Leave to cook until you can see the edges turning brown, then loosen with a palette knife or spatula and flip. Cook until spottily golden on the other side, then serve immediately, or store in a warm oven until you're ready.

Crepes v pancakes: which do you prefer and how do you like to serve them? And where, in France or further afield, serves the best?