How to cook the perfect digestive biscuit 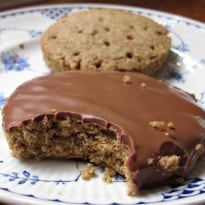 It's the good, old British staple - and it's always there for you, come rain or shine. Just don't expect it to actually do anything for your digestion ...

OK, the digestive biscuit isn't going to win any prizes for excitement - it lacks the exotic glamour of the garibaldi, the aristocratic connections of the viscount, or even the blowsy thrills of the pink wafer - but when push comes to shove, it's the biscuit that has your back. It's the kind of thing that ought to come as standard issue in a crisis, along with a cup of tea and a sit-down.

Originally conceived as a medicinal aid for the digestion-obsessed Victorians, the fact it's not allowed to be sold under that name in the US should tell you everything you need to know about the healthful properties of the average digestive biscuit. I'm not knocking the commercially produced variety - they're comfortingly familiar, even if certain big brands keep meddling with the recipe in the name of progress - but when palm oil features in the ingredient list, it's hard not to wonder whether you might be better off if you made your own. Get the recipe right, and you're set for life.

As its slightly spurious medicinal origins might suggest, most digestive biscuits are fairly wholesome affairs - though I suspect the big-brand digestives use white flour ('wheat flour' is listed on packets), the only recipe I find that includes any is Sophie Grigson's, and that in a 1:2 ratio with the wholemeal stuff. Her digestives are indeed the closest in texture to the commercial versions, but I'm not looking for a slavish imitation here, and I quite like the slightly heavier, coarser texture of the all-wholemeal variety.

Geraldene Holt leaves it at that in her book Cakes, as does Annie Bell in her Baking Bible, but most also include some sort of oatmeal - the fine grade in Grigson's case, but again, the nubblier mouthfeel of the medium kind, as deployed in Gary Rhodes' recipe, feels more satisfying.

The Great British Bake Off take on things (from the GBBO Everyday book, which somewhat ambitiously promises "over 100 foolproof bakes") includes a high proportion of crushed pistachio nuts which, strictly speaking, is getting a bit fancy with the humble digestive. That said, they're curiously addictive; not the perfect everyday biscuit, perhaps, but a variant that's well worth a punt on a special occasion.

The original digestive recipe relied on the supposed medicinal properties of bicarbonate of soda, and so most recipes include it. Of those I try, only the Great British Bake Off uses baking powder instead (which, of course, contains bicarbonate of soda, in combination with cream of tartar). Bell uses both, Rhodes gives you the option of either, and Grigson and Holt stick with tradition. I'm all for innovation, but I'm not entirely sure you want digestive biscuits to rise - they should be crunchy and dense, not risen and chewy, like Bell's version, tasty as they are. The bicarbonate of soda, without much accompanying acid, does little in the way of raising, but it does supply a distinctive, if subtle, bitter flavour which seems to make all the difference to the taste of the biscuit.

Sugar syrup is the order of the day in the mass-produced digestive, but only Rhodes allows for white sugar, and that as a mere alternative to the soft brown stuff. Flavourwise, there's no comparison between the ultra-refined caster and a good muscovado, and Holt's treacley dark brown variety is the best of the lot. She doesn't put enough in for my liking though; her version could almost pass as a savoury cheese biscuit and while a digestive shouldn't be as sweet as a Hob Nob, say (and the golden syrup in Bell's biscuits moves them dangerously close to that territory), you need a certain amount of sugar to see you through a crisis, or indeed, just a tea break. Bell uses demerara as well as the heretic syrup. I'm tempted - I like the crunch it adds - but decide that such showiness is not quite in the quiet spirit of the enterprise. A digestive is not a biscuit that should draw attention to itself.

Everyone uses butter, rather than palm or vegetable oil, but Holt adds an egg yolk as well, while Rhodes and Grigson loosen the dough with milk. Holt's are flakier and drier (again, this fits better with my idea of a savoury biscuit), while Rhodes' spread alarmingly in the oven, giving large, flat biscuits that taste the part, but certainly don't look it. Grigson seems to have the proportion of wet to dry ingredients about right - I'm going to up the liquid content slightly, as they're slightly dry for my taste, but they mimic the original almost perfectly. Rubbing the butter into the flour, as if making pastry, works better for my purposes than the creaming method Bell uses to beat air into her mixture - I want my biscuits to stay hard and flat (all the better for dunking).

Bell chills her mixture for "several hours or overnight", but I don't think that's necessary - some time in the fridge is useful to aid rolling out, and help the biscuits keep their shape in the oven however, and I'm surprised few other recipes recommend it. Rhodes rolls his dough out between two sheets of clingfilm; particularly useful with a soft mixture like his, but a tip that's handy enough with a crumblier variety too. If you don't want to waste any, it's not absolutely necessary, but it will make your life easier. Bell shapes hers into walnut-sized balls, as if making cookies, rather than rolling and cutting the dough. It's far quicker, and works perfectly, but not for digestives as we know them.

Not much to say here really - it's a personal decision whether you go for milk, dark, flavoured, or none, so the only tricky bit is keeping hold of the biscuits while you're dunking. I would, however, recommend slapping on a few layers, because if you are going to gild this unassuming lily, you may as well do so in style. That said, I think they're equally pleasing left plain, especially when accompanied by a strong cup of tea and a sliver of cheddar. As to the relative effects on your digestion, I really can't say.

Sift together the flour and oatmeal in a food processor or large mixing bowl, then rub in the butter until it looks a bit like breadcrumbs.

Stir in the bicarb, sugar and salt, then add just enough milk to bring it together into a coherent dough that will hold together well. Flatten into a disc, wrap in clingfilm and chill for 30 minutes.

Preheat the oven to 170C (fan) and line two baking trays with baking parchment. Roll the dough out between two sheets of clingfilm, or on a very lightly floured work surface, until about 4mm thick, then cut out your biscuits. Arrange, spaced out on the trays, and decorate with a fork, skewer or cocktail stick.

Bake for 12-15 minutes until golden (12 if you prefer them soft, 15 for a crisper finish), then cool on the tray for 5 minutes before transferring to a rack to crisp up.

Meanwhile, melt the chocolate in a heatproof bowl set over a pan of simmering water. Once the biscuits are cool, carefully dunk one side of each into the chocolate to coat, and set back on the rack to dry - you can repeat this process several times to build up the layers.

Digestives: dull Victorian relic, or queen of British biscuits? Do they have any "digestive" properties whatsoever, and what, apart from dunking in tea, do you like to use them for? And if you're not a digestive devotee, just what is the best biscuit?