How to Make Perfect Singapore Noodles 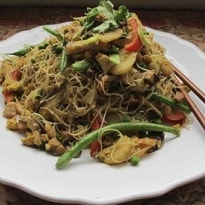 Forget your memories of takeaway stodge - when done well, this Cantonese creation is colourful, light and nutritious

I spent some enjoyable minutes flicking through a book on Singaporean cuisine, pausing at recipes for prawn laksa, and egg roti, fish head curry and hainanese chicken rice, before discovering that Singapore noodles are all but unknown in that country - in fact, they're a Cantonese creation, popular in the restaurants, street stalls and tea houses of Hong Kong.

Why they're credited to somewhere else entirely is a mystery - I wonder, given the famous fusion cuisine of that island, whether it might be something to do with the curry powder that's often responsible for the dish's violent hue, but if anyone actually knows, please do spill the beans.

Whatever the story behind the name, any country should be proud to claim this fine dish as its own. Singaporeans, apparently, get cross at being asked about it. If they're not keen, maybe we should make a bid for it instead?

Super-thin rice noodles, or vermicelli, are de rigueur here, but as with pad thai the secret is all in the preparation. The noodles need softening before they're added to the wok. Approaches to this vary from cooking them and leaving them to cool - from the blogger Lizzie Mabbott, aka Hollow Legs - to merely soaking in warm water: Ken Hom suggests 25 minutes, Delia Smith (who credits her recipe to the late, great restauranteur Ken Lo) 15 minutes and Ching-He Huang a paltry 10.

Smith and Huang's noodles are a bit chewy for my taste, while Hom's seem rather mushy (of which more later). Mabbott's are perfectly cooked, although I slightly prefer those from the blog Taste Hong Kong, which takes a similar approach but scalds them in boiling water for a mere 30 seconds before leaving them to cool and dry for half an hour. The strands remain more separate, although I find they need very slightly longer in the hot water for my taste.

As with so many noodle dishes, the protein element is very much up to the individual diner. Prawns are common; Taste Hong Kong marinates them in salt and white pepper before use, but with so many other salty elements in the dish, I'd prefer to let them remain au naturel. Smith uses dried shrimp, soaked in water, which I find too strongly fishy.

Pork also pops up a lot: Smith and Huang both use bacon, while Hom suggests ham or, like Taste Hong Kong, char siu pork. Smith gives the option of cooked chicken or pork, and indeed almost any meat you happen to have left over would work, but I really like the strong sweet and savoury flavour of the barbecue pork here. (If you're cooking the meat specially, I recommend this recipe by Nigel Slater as a solid place to start.)

Egg also makes a nice addition - Taste Hong Kong whisk theirs with fish sauce first, while Hom seasons his with sweet, nutty sesame oil, which I prefer. Most recipes seem to stir the egg into the noodles, but I like to stir-fry separately it until it's almost set, so there are distinct flakes of egg in the finished dish.

Mabbott uses tofu puffs, which she describes as "optional, but great for texture". They do indeed add an interestingly chewy element to the dish; I don't want to overload it with ingredients, but if you'd prefer to keep it strictly vegetarian, they're a good thing to consider.

That said, non meat-eaters won't go hungry without tofu, because Singapore noodles tend to boast a plethora of vegetables, from kale or cabbage (Mabbott) to beansprouts and carrot (Huang). To be honest, the choice is largely up to you, but the selection below offers a pleasing contrast of flavour and texture: red pepper (Huang) and peas (Hom) for sweetness, water chestnut (Hom) and blanched green beans (Mabbott) for crunch, and shitaake mushrooms (Huang) for yielding chewiness and savoury flavour. (Hom and Smith both use dried mushrooms, but even after soaking I find these a little too chewy.) The fresh flavour of spring onions, meanwhile, works better here than Smith's yellow version, which has a tendency to melt into the other ingredients.

The first rule of Singapore noodles is that they have to be a bright, unnatural yellow: it's the law. The most usual way of achieving that colour is with curry powder, and it does the job nicely; if you're worried about them being pallid, you could add turmeric as well, as Taste Hong Kong suggests, but leaving out the curry powder altogether, as in Huang's recipe, misses a trick on the flavour front. Root ginger and garlic are also a must as a flavour base, and I like the hint of heat that Hom and Mabbott's green chilli provides. Coriander leaves, as used by the same pair for garnish, add a touch of colour and freshness to the dish.

All the recipes, apart from that of Taste Hong Kong, add a little liquid to the noodles as they cook. Smith makes a rich broth from the mushroom-soaking liquid and dry sherry, while Huang goes for soy and oyster sauce and rice vinegar, and Mabbott keeps things simple with a mixture of light and dark soy sauces.

Hom, meanwhile, makes a fairly substantial sauce with coconut milk, sugar, shaoxing rice wine and chicken stock, which he then simmers the noodles in. I find this makes them a bit mushy, and though delicious the coconut flavour changes the character of the dish completely. "It tastes sort of Thai," as my chief tester puts it.

I like the savoury flavour of the rice wine (you can use dry sherry if you can't get hold of it) and soy sauce, rounded out with just a pinch of sugar; those who fancy a little more heat should sprinkle with Mabbott's chilli oil.

As with all stir-fries, the trick is in the mise en place: have everything lined up next to the hob, ready to go, before you so much as light the gas. I also like Taste Hong Kong's tip for making the task a little easier. After describing the "dai pai dong, that is the street-side open-air food stalls, where you might be able to witness their chefs tossing these noodles up in the air from the iron woks", the author admits that "holding such a large cooking vessel is already a big challenge, not to mention manipulating the foods at the same time with one single arm". To reduce the workload, they toss the scalded noodles with curry powder and seasoning before adding them to the wok, so they're already well combined: all you have to do is heat them through. Those well-versed in the art of stir frying may wish to skip this step, but I found it helpful.

Whether you cheat or not, the whole process should take little more than five minutes, plus drying time for the noodles. Not bad for a veritable feast.

Put the vermicelli in a bowl, and tip boiling water over until covered. Leave for 30-45 seconds until softened, but not soft, then drain and leave to dry in a sieve or colander for about half an hour, tossing occasionally to make sure they don't clump together.

Blanch the beans in boiling water, then drain and set aside. Add half the curry powder and all the soy sauce, wine and sugar and toss together well until the noodles are well coated.

Put the garlic, ginger, chilli, spring onion and remaining curry powder in one bowl, the vegetables in another and the meat in a third. Put these near the hob along with the beaten egg.

Heap on to a serving plate, top with coriander and serve immediately.

Singapore noodles: greasy takeaway stodge or Cantonese culinary genius? What do you like to put in yours, and can anyone shed any light on the name?

In Picture: Perfect Singapore noodles. All photographs: Felicity Cloake for the Guardian