How to make the perfect apple pie 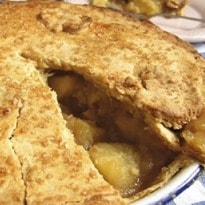 Puff or shortcrust, cooking apples or dessert, cream or custard - and can plain old apple pie compete with tarte tatin and strudel?

When something is described as "as American as apple pie", it simply means that no one remembers exactly which immigrant group brought it with them - and where the apple pie is concerned, those mellow mists of time are more like a fruitful fog, because it's been a staple in the States since before those states existed.

Indeed, the Oxford Encyclopedia of Food and Drink in America suggests that the typical American version of this classic dessert descends from "15th-century English pies" and ideas brought over by the earliest colonial settlers.

Having looked at a few medieval recipes, many of which involve sugar, sweet spices, and butter, I'd go so far as to suggest that the typical British pie hasn't moved on much either, and with good reason. If the pie ain't broke, then you may as well eat it.

Once upon a time, the pie would have been made with whatever variety of apple you happened to have in the orchard, woods or local market. This presumably accounts for the vague reference to "some apples" in the family recipe included in Florence White's 1932 Good Things in England.

Thankfully, most modern recipes are more specific: Jane Grigson recommends reinette or, like Tamasin Day-Lewis, cox's orange pippin; Marcus Wareing bramley and braeburn or pink ladies, and Angela Boggiano bramleys and cox's. I'm unable to find the first but try all the others, and decide that I like Boggiano's combination best. The cooking apples break down into a sharp, pleasingly fluffy mush, while the spicy flavour of the cox's seems more fitting in a pie than the crunchy, sweetly effervescent pink ladies, or the blander braeburns.

The bramleys need cooking before adding to the pie, as Boggiano and Wareing suggest, but, like the latter, I'm going to use the dessert apples raw, for the maximum contrast of texture and flavour. The two should remain distinct in the finished dish, though I'm not going to add them in two separate layers, as in Wareing's recipe; his pie is so deep that it's possible to eat it without ever mingling the bramley and cox's in one bite.

Grigson thinly slices her apples, while White expressly warns against this on the basis that "the juice will boil out before the apples are cooked, and the result will be tough and tasteless". I certainly don't find this to be the case, but I do prefer the texture of larger chunks.

Grigson uses puff, while everyone else chooses a variety of crumbly shortcrust, which, though less visually impressive, I prefer - the rich stodginess is a better match for the autumnal apple. Given this is a dish better served warm or cool than piping hot, the shortcrust keeps better too.

Actually, I lie: White's recipe has a puzzling pastry that is halfway between a shortcrust and a bread dough, so wet it's almost impossible to shape, but, once baked, beautifully crisp thanks to the addition of lard. Again, however, the texture is one best appreciated straight from the oven.

Wareing and Boggiano both go for a rich shortcrust, yellow with egg yolk and sweet with sugar, while Day-Lewis chooses a plainer pastry, which she suggests making with spelt flour for its "nuttiness and texture". I like the almost crumble-like richness of Wareing and Boggiano's pastry, but the contrast between the sweet and sour fruit filling and the more savoury flavour of Day-Lewis's version is ridiculously pleasing; I can't stop picking at it. An enriched but unsweetened spelt pastry seems the way to go here.

Wareing flavours his pastry with lemon zest, which is a nice touch, while Boggiano goes for mature cheddar, citing the Saxon proverb that "apple pie without the cheese is like a kiss without a squeeze". I wholeheartedly agree with her in theory, but it's a bit weird with custard, and apple pie is naught without a drop of Bird's. If you're more of a cream or creme fraiche person, however, I'd urge you to give it a whirl.

Boggiano, Day-Lewis and Wareing all encase their pies in pastry, while Grigson and White only deploy a pastry lid. This seems like cheating to me: a proper apple pie should be free-standing if required. That said, give the bottom a fighting chance at crispness by doing as Day-Lewis suggests, and sprinkling the pastry with flour and sugar before adding the fruit. Saveur magazine informs me that, as the filling cooks, "this extra layer will protect the pie dough from absorbing too much moisture".

Grigson adds raisins to her filling, some of which I decide to soak in rum in obedience to Annie Bell's recipe. They look pretty, but I find them too sweet, booze or no booze - unlike White's rose petals, which get entirely lost in the welter of other ingredients. If you'd like a floral note in your pie, a little rosewater would be a better bet.

Sweet spices are still popular; White and Day-Lewis use cloves, Day-Lewis and Wareing cinnamon, and Day-Lewis also sticks in nutmeg. Her pie is too heavily spiced for my liking, but just a hint perks the whole thing up considerably without detracting from the apples.

The same goes for sugar: Day-Lewis uses a mixture of dark and light muscovado, but the treacly bitterness of the latter is overpowering. The light brown sugar, however, adds a more interesting, caramel flavour.

As extra insurance against that apple flavour getting lost, I'm taking a tip from White's recipe, and stewing the cores and peel in water to make a kind of apple stock, which gives her pie a marvellously intense flavour. It may sound like a bit of a faff, but given you have to peel and core them anyway, it's only a matter of sticking the results in a pan of water and leaving them to bubble for 15 minutes, and the results are truly remarkable.

Day-Lewis adds more flour to the fruit itself, possibly as a thickener, but, save for the base layer, I don't think this is necessary: the stewed apple will do that job with considerably less risk of gumminess.

Grigson, White and Day-Lewis add lemon zest, which has a natural affinity with apples, to their fillings, with Day-Lewis using it in combination with orange zest. As I've included zest in the pastry, I won't be using it here, but a spritz of lemon juice, as Boggiano suggests, is an easy way of brightening the flavour.

Grigson and Day-Lewis baste the apples with butter, which gives the whole dish a lovely, silky richness - elevating it from a simple, homely pleasure to something really quite special. Which is as it ought to be.

Peel and core the bramleys, reserving both. Cut the flesh into chunks. Melt one tablespoon of butter in a saucepan and add the cinnamon stick and cloves. Fry for a couple of minutes, until aromatic, then add the chunks of apple, plus 100g of the sugar. Cook, uncovered, stirring occasionally, for about 30 minutes until the mixture is fluffy and fairly dry.

Meanwhile, put the cores and peel in a small pan and just cover with cold water. Bring to the boil, then turn down the heat and simmer for 15 minutes. Allow both this and the compote to cool, then remove the cinnamon stick and cloves from the compote (if you can find them).

To make the pastry, put the flour in a large mixing bowl and add the grated butter and a generous pinch of salt. Rub in the butter to the consistency of fine breadcrumbs, then stir in the egg and the finely grated zest of the lemon until you have a dough (or you could use a food processor). Wrap well and chill for 30 minutes.

Meanwhile, peel and core the cox's and cut them into chunks. Stir these into the stewed bramleys along with the juice of half a lemon, 50ml of the apple stock, a grating of nutmeg and the remaining muscovado (start with 125g sugar, and add more if you think it is too sharp).

Preheat the oven to 180C. Grease a large pie dish with butter, and roll out two-thirds of the pastry to about 5mm thick. Use to line the dish. Sprinkle the base with one tablespoon of flour and one tablespoon of sugar. Top with the apple mixture and dot the top with small pieces of the remaining butter.

Roll out the remaining pastry to 5mm thick. Brush the rim of the pastry base with egg white, and then top with this lid, pressing down to seal. Trim the edges (use these trimmings to decorate if you wish), and cut a small hole in the middle. Brush with egg white and sprinkle with sugar. Bake for 35-45 minutes until golden, then allow to cool a little before serving.

Can apple pie compare to the fancy likes of a tarte tatin or an apple strudel? Do you prefer puff or shortcrust, flaky or filo - and has anyone ever had a mock apple pie?