How to Make the Perfect Lamb Kofte 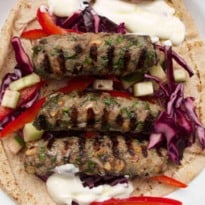 There are endless varieties of this meaty Middle Eastern delight. But is there a version that stands out above the rest?

Some ideas are so good that everyone wants a piece. Take the kofte, a minced meat creation enjoyed, in various forms, from Baghdad to Bursa, Casablanca to Calcutta. The Turkish may have the monopoly on kebab production in my neck of the woods, but the kofte itself refuses to respect any national boundaries.

In fact, strictly speaking, as the name comes from the Persian word to grind, they don't have to involve meat at all - you can have potato kofte, prawn kofte, even cheese kofte, if you want, as long as they're minced together finely enough. But, it being barbecue season, I'm sticking to the version I eat most often - cigars of lightly spiced meat, chargrilled and served up with warm flatbreads, crunchy salad and a tangy yoghurt sauce. Forget same-old sausages and boring burgers - these are what I'll be sticking on the grill this summer.

I'd always assumed that meat in the kofte context meant lamb: that's certainly what always seems to be cooking when I cycle round Turkish London with my mouth hanging open. In fact, a mixture of lamb and beef is surprisingly common - indeed, Rebecca Seal includes a recipe in her new book Istanbul using only beef, and Yotam Ottolenghi and Sami Tamimi use an equal amount of both, while Hugh Fearnley-Whittingstall goes for slightly more lamb. I find the stronger flavour of the lamb stands up better to the spices than the subtler beef, so there seems little point in buying both.

Cut is important here: you need something with enough fat to stick together on the grill, and remain nice and juicy on a high heat. Leg, as recommended by Anissa Helou in Lebanese Cuisine, has a tendency to be a bit dry: the shoulder used by Ottolenghi and Tamimi, Fearnley-Whittingstall and Claudia Roden in Arabesque gives a far better result.

Prepackaged mince doesn't offer much in the way of information on which bit of the animal it hails from, so if possible, go to a butcher and ask them to mince you some shoulder - if not, then look for stuff that's well-flecked with fat, and steer clear of the word lean. (Alternatively, do as Helou suggests, and use a food processor to finely chop pieces of shoulder.)

Onions seem to be a must in koftes: only Fearnley-Whittingstall dumps them in favour of garlic. Grating them, as Helou, Roden and Allegra McEvedy suggest, though certainly more of a pain than Ottolenghi and Tamimi's fine chopping, gives the kebabs a more assertively oniony flavour, though it's important to squeeze them out a little, as McEvedy suggests, or they'll make the mix too sloppy to hold together in the pan. You can also use a food processor here, as Roden and Helou do, but this tends to chop the onion so fine it's difficult to separate it from the excess liquid, so I'd only take this road if you've got people coming over and you'd prefer not to have mascara halfway down your face when they arrive. Grating onions is, I admit, an unpleasant task, but the results are, I think, worth shedding a few tears over.

Peppery parsley is the most popular addition to koftes: Fearnley-Whittingstall is the odd one out yet again, but then he is making "merguez koftes" which means he's got a few other spices up his sleeve. I love the emphatically Middle Eastern flavour, and the green colour parsley gives the kebabs - and even better is McEvedy's mix of mint and parsley. Mint is always a happy pairing with lamb, and here it adds a welcome freshness too.

Fearnley-Whittingstall uses a dazzling array of spices: fennel, cumin, coriander, paprika, cayenne pepper, sumac and harissa paste, which makes his koftes as orange as a Calippo, or indeed the notoriously geyser-like merguez sausage, ruiner of a thousand silky summer outfits. Undoubtedly delicious, but a little more North African than I'm after here.

Roden keeps things very simple with salt and pepper, but, though it's difficult to criticise any variety of grilled lamb, I can't help feeling they could do with a little pepping up (presumably not a problem if, as she suggests, you serve them with a selection of mezze). McEvedy goes for Turkish pepper, which lends an attractive red speckle, and Ottolenghi and Tamimi for a fresh red pepper, but I'd prefer to save any heat for a chilli garnish.

I'm going with the sweet spices used by Ottolenghi and Tamimi, and Helou: cinnamon, allspice and nutmeg. These chime perfectly with the natural sweetness of the meat, and, I think, give the koftes a distinctively Middle Eastern flavour.

McEvedy adds breadcrumbs to her kofte mix, which gives them a real juiciness, but which feel wrong here: I'll defend the rusky British sausage to the death, but I do think these should be all meat.

Fearnley-Whittingstall rolls them in poppy and sesame seeds before cooking, which looks great, but has a tendency to burn if you're aiming to char the meat - more successful are Ottolenghi and Tamimi's chopped pine nuts, lending a sweet crunch to every mouthful.

Roden and Helou both recommend a food processor. If you can only buy shoulder whole, rather than minced, I'd recommend dicing it and then using the food processor to finely chop the meat into a mince-like consistency. Otherwise, you can use your hands to squidge everything together: they're much easier to wash up.

Helou also warns against trying to cook the kebabs on long flat skewers, and even Roden acknowledges it's easier to do them in a little flat balls. Ottolenghi and Tamini say that, at home, they "can be made in any shape: flat patties, thin fingers or torpedoes", and I'd suggest, unless you're barbecuing, opting for one of those instead. If not, do as Ottolenghi and Tamini suggest: form them around the skewers well in advance, and leave them chilling until needed. Not only will this make the koftes less delicate, but it will give the flavours time to develop and infuse, as in Fearnley-Whittingstall's recipe.

Grate the onions, and squeeze out most of the liquid through a sieve. Put in a large bowl. Finely chop the parsley and mint, and add.

Mix in the meat, pine nuts, spices and salt until thoroughly combined. Shape into fingers, patties, meatballs or around flat skewers, cover and chill for at least an hour, or up to 12.

Heat a frying pan, griddle or barbecue greased with a little oil. Cook the kebabs until golden brown on all sides, and cooked through to your liking. Eat immediately with flatbreads and yoghurt.

Koftes, koftas - which country makes the best, and what's your favourite version for the summertime? And does anyone have any tips for keeping them on the skewer?