In Georgia's Music Capital, the Food Starts to Find its Rhythm 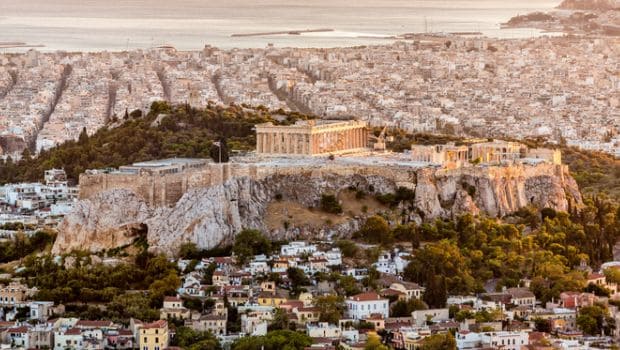 Highlights
I sit on a restaurant porch, sipping a sweating glass of Basque rosé, watching Athens being Athens. A large statue of a bulldog with a double helix painted across its torso glowers in front of the Biotest Plasma Center. Two young people stroll by, she in a long cotton halter dress, he in a lumbersexual beard toting a basket of fat, blushing peaches, O'Henrys, I'm guessing, or maybe Elbertas. Then a mother and father in matching red University of Georgia shirts with "Go Dawgs!" in bold black letters look back at their child, an embarrassed freshman who probably has just moved into his dorm, exhorting the kid to "Come on! We're fixing to eat!"

I'm fixing to eat, too, here at the National, celebrated for using Southern staples like heirloom bacon, Carolina Gold rice and Vidalia onions cooked Mediterranean-style. It's the first real chance I've had to experience Athens's increasingly celebrated foodie culture. I've been here before - for football games. But although I love tailgate ribs and 'tater salad, visits to Sanford Stadium aren't usually memorable for the cuisine. No, this time I'm eyeing stuffed medjool dates, grilled pork chops with pickled okra and pecans, and Brasstown beef, raised a few miles over the border in North Carolina; this time, I'm going to that farmers market I keep hearing about from my tomato-snob friends.

Unless they're students, alumni, or other worshipers in the Church of the Dawg, visitors often bypass Athens in favor of Savannah, the mountains or, of course, Atlanta. They shouldn't. There's Athens's musical history, nurturing the likes of the B-52s, Vic Chesnutt and R.E.M. at the 40 Watt Club and now boasting the likes of Danger Mouse, Elf Power, and Of Montreal. There are eccentric public monuments: Athena, goddess of wisdom, stands tall on North Thomas Street; a 4,000-pound anchor has landed in the middle of Broad Street; and a Civil War-era double-barreled cannon sits in front of City Hall.

Plus, the bulldog statues, dozens of them, big as ponies. I've seen one dressed as Carmen Miranda, one called "Caesar Dawgustus" wearing a toga, and "AnAtomic Dawg," a see-through version displaying his skeleton and muscles as he guards the College of Veterinary Medicine.

The university, founded in 1785, is leafy, white-columned and lovely. It's the home of the Grady College of Journalism, where I get to spend a week teaching with the likes of CNN international reporter Moni Basu, television writer, essayist and documentarian Lolis Eric Elie, and John Edge, the Southern Foodways Alliance director and much-decorated author. Zora Neale Hurston biographer Valerie Boyd created an innovative Master of Fine Arts program in nonfiction here, the only one of its kind. By day, we discuss the best ways to tell a true story. By night, we go out and drink - hey, we're writers! - and eat.

A college town, especially in the South, is a locus of tradition and ritual as well as a laboratory of ideas, somewhere to experiment with interesting haircuts, new music and alternative identities. Until fairly recently, however, college towns were not a byword for memorable dining. John put it this way: "College towns were once rife with cinderblock bunkers where coeds ate wings and burgers. Today, Athens is a mature restaurant town."

He means, I assume, Seabear, where you can get a salty bouquet of oysters from Virginia, Florida, New England and the Pacific Northwest, washed down with a Dark and Stormy (Gosling's Bermuda black rum, lime bitters, lime and ginger beer). Or maybe the poussin and local cheeses at the Branded Butcher or the Frogmore Stew with Gulf shrimp and house-made andouille at 5&10. Or the cucumber-radish-shrimp-sumac gazpacho at the National, which has just appeared in front of me, smelling of late summer.

"Bertis Downs, R.E.M.'s manager, used to call Athens a gastronomic wasteland," says André Gallant, whose book about a Georgia oysterman, "The High Low Tide," will be published next year. "Good restaurants are a newer thing for us."

Gallant likes the way "the world comes to Athens." He's Canadian, brought south in the first instance by an academic parent. Kind of like Hugh Acheson, the James Beard Award-winning proprietor of the National and the 5&10 and frequent "Top Chef" judge. Gallant says, "I know the names of all my neighbors, but then I can walk onto campus and hear a clarinettist from Hong Kong or see work exhibited by an artist from the Venice Biennale. We have good meats, incredible taquerias, craft cocktails, and we've become the epicenter for organic agriculture in Georgia."

On a Saturday morning, I head out to Bishop Park to meet André at the Athens Farmers Market, where a lot of this organic agriculture is on display. Stalls tempt with gem-colored fruits and vegetables, artisanal bread, honey, handmade soaps, goat cheese, grass-fed beef, pastries and vegan, biodegradable dog-cleaning products made from essential oils, called "Shampoochie."

It's nearly the end of Georgia peach season (the South Carolina varieties hang on a little later) so I negotiate with an Oconee County grower for a box of voluptuously scented, fat, velvety fruit to haul back to my peach-loving mother in Tallahassee. One fruit down, more to go. We pause at a table piled with tomatoes in colors from yolk yellow to deep garnet, some the size of grapes, some the size of grapefruit: Travelers, Romas, Black Tulas, Georgia Streaks and rich burgundy-fleshed Cherokee Purples. André points at them: "You want some of those," he says.

That's for damn sure. I want a lot of those. But I settle for a couple of pounds. Plus some amethyst-colored eggplants, a couple of heads of aromatic elephant garlic and some deep magenta okra. I'm tempted by the armloads of sunflowers and dahlias, but figure getting the tomatoes back to North Florida in the vicious late August heat will be hard enough.

But, as the great Georgian Scarlett O'Hara once said, I'll think about that tomorrow. I still want to visit the Tombs of the Ugas, the memorial area of Stanford Stadium where the English bulldogs who act as university mascots are laid to rest. And maybe get up with some of the writers at the Old Pal, a fine, dim establishment where André tends bar. He promises to make us good Manhattans and proper Pimm's cups and other cocktail delights. Just now, it's lunchtime and I have a momentous decision to make: smoked chicken at the White Tiger or tilapia tacos at Taqueria del Sol?
---
If you go

An ecologically-minded boutique hotel with sleek contemporary rooms on the edge of downtown, within walking distance of a lot of good eats. Rooms from $124.

Bed-and-breakfast in an antebellum house 10 minutes outside Athens, with Victorian furnishings for those who want a full taste of the Old South. Rooms with private bath from $159.

An informal and innovative restaurant. Tapas from $5; big plates from $20; good wine from $10 a glass.

A lively place, full of locals, students and faculty from the University of Georgia partaking of oysters and craft beers during the excellent happy hour. Small plates around $7.

A funky-chic joint in an old and pretty neighborhood of Athens. They smoke their own meat and source most ingredients locally. A barbecue plate with mac and cheese is $10.50. No booze.
The Old Pal

Unpretentious, friendly neighborhood bar known for house cocktails such as the Green Goddess, which involves esoteric ingredients such as Absentroux, Cathead vodka and "Herbsaint mist." From 10 p.m. to 12 a.m., Pabst Blue Ribbon cans cost $1 and shots of Jameson cost $3.

Promoted
Listen to the latest songs, only on JioSaavn.com
The freshest produce and baked goods available. Open Saturday mornings, 8 a.m. to noon, April 2 through Dec. 17.Consider taking a self-guided tour, walking or driving. Classic City Tours offers a "Heritage Tour" which takes in the university, antebellum houses and museums for $15 a person.