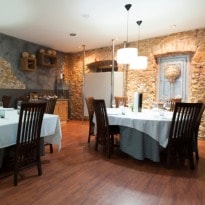 Indian food has been widely appreciated and accepted across the globe. Indian restaurants abroad attract a bunch of food enthusiasts, especially in United Kingdom. Gymkhana, an Indian restaurant in London's Mayfair area is the first to be named as the 'National Restaurant of the Year'. The restaurant which opened in September 2013, has won appreciation from various culinary experts from all around the world. Inspired by colonial Indian gymkhana clubs, the restaurant blends authentic Indian food with modern British styling.

"It's a testament to the quality of Gymkhana as well as the true diversity of UK's eating out scene that an Indian restaurant has been named the best place to eat out in the United Kingdom," said Stefan Chomka, editor of Restaurant magazine.

Promoted
Listen to the latest songs, only on JioSaavn.com
'The Clove Club', one the oldest restaurants in Britain stood second after Gymkhana. Established way back in 1865, 'The Clove Club' is known to use exotic British ingredients that are often overlooked. 'The Ledbury' in London holds the third position. With world famous chef Brett Graham heading the kitchen, 'The Ledbury' grabs a place in the world's 50 best restaurants. Gymkhana seems to have battled through some tough competition with such legendary restaurants.