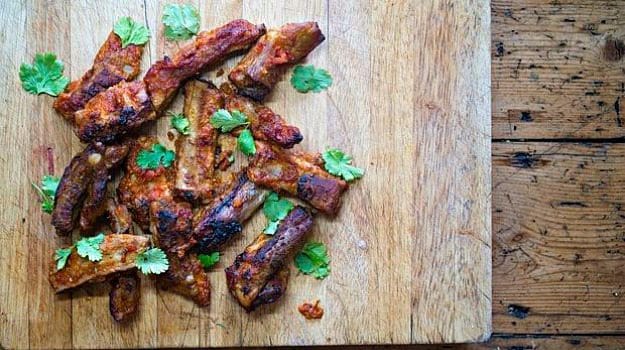 These sticky, sweet, melt-in-the-mouth ribs make a thrifty meal. Try to keep them as an occasional treat as I use full-sugar cola to add a punch of flavour.

Ribs are one of the cheapest cuts of pig, and, like most of the beast, so tasty. I make this dish as an occasional treat – it’s not the healthiest recipe, since I use full-sugar cola for extra sticky sweetness. If you’re a frugal foodie, scrub the bones clean to make a pork bone stock (the roasting will have brought out their flavour) – cover with water, bring to the boil and simmer them for a few hours on a low heat with some garlic, carrot, onion, herbs and salt for a succulent slow stock.

½ tsp mustard (I like English, but any will do)

330ml can of full-sugar cola

To make the ribs, toss the garlic and onion into a shallow pan with the oil. Season, bring to a low heat and gently saute for a few minutes to soften.

Transfer the mix into a blender, add the chopped tomatoes, puree and mustard and pulse to a rough liquid. Pour back into the saucepan – it might look a little messy right now, but trust me, it gets better.

Add the can of cola and crank up the heat to bring to the boil, mixing well. Reduce to a simmer for 10 minutes to form a thick sauce that falls slowly from your spoon.

If you have a meat cleaver, halve your ribs to make them shorter – I like picking at smaller ribs, and so do the kids. However, it’s a numbers thing when you’re feeding a horde, rather than a recipe necessity, so don’t rush out to buy a butcher’s chopper if you don’t have one.

Line a roasting tray with foil. Pop the ribs in and marinate with the sauce. Cover loosely with more foil and cook in the centre of the oven at 180C for an hour.

Whip the foil off, spoon the marinade back over and cook for a further half an hour. Enjoy.