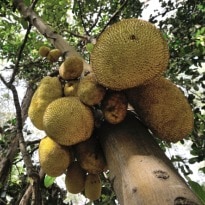 It could have brought villagers in Meghalaya huge profits. Instead, vast quantities of jackfruit are going waste in the impoverished Garo Hills region. Authorities want to reverse the situation.

Officials estimate the loss at Rs.434 crore each season as villagers leave the fruit rotting in the open.

"It is a paradox that Garo Hills wastes 80 percent of the fruits though people suffer from lack of proper nutrition and income," explained Vijay Mantri, the district magistrate of East Garo Hills.

"This is the jackfruit season. This year too, a huge number of jackfruits will be rotting under the trees because of lack of intervention," he said.

In East Garo Hills itself, Mantri said the villagers were losing more than Rs.118 crore a season by underutilizing the fruit.

"It is locally consumed. Lack of awareness among the rural communities is a major problem," Mantri told IANS.

The jackfruit tree has many uses. It provides food, timber, fuel, fodder as well as medicinal and industrial products.

The fruit is rich in vitamins A, B and C besides potassium, calcium, iron, proteins and carbohydrates.

The government is determined to create awareness about the fruit and explore livelihood opportunities.

The festival, the first of its kind, will be held at Williamnagar, the district headquarters of East Garo Hills, 312 km from Shillong, the state capital of Meghalaya.

The main attractions of the festival will be exhibition stalls, workshops, cooking competition, a jackfruit eating competition and a seminar.

"We expect a lot of enthusiastic participation from across the Garo hills for the biggest jackfruit competition. This can also become a platform for setting world records, if possible," Mantri said.

The Guinness World Records for the biggest jackfruit stands in the name of a Hawaiian farmer. It weighed 34.4 kg.

"The Garo hills has the potential to beat this record if awareness is made through these kinds of festivals," Mantri added.

East Garo Hills falls under a sub-tropical climatic zone and hence there is abundant number of jackfruit trees.

Promoted
Listen to the latest songs, only on JioSaavn.com
"Jackfruit farming is the best alternative for many challenges the economy faces today," a horticulture scientist said.

"The evergreen fruit tree, with its cost-effective growth and good returns, is bound to become the favourite of farmers once they know its merits.

Comments"The tree requires little care in the first four years and continues to yield profit for a few hundred years then on," the scientist said.