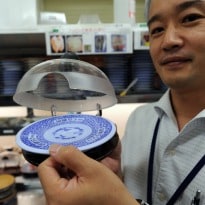 With its masters required to hone their skills over decades, sushi in Japan is steeped in tradition. But it is also often a high-tech operation where robotic precision steals the limelight from the chef's knife.

The country is dotted with thousands of "kaiten" (revolving) sushi restaurants where raw fish slices atop rice balls travel on conveyer belts along counters waiting to be picked up by diners.

Behind the scenes, however, it is far from a simple merry-go-round, with robots in some locations rolling out perfectly-sized rice balls onto plates embedded with microchips.

Measured dollops of spicy wasabi paste are squirted onto the rice assembly-line style before they're topped with raw fish.

And the most cutting-edge eateries are even connected to monitoring centres that can quickly tell whether the right balance of dishes is being produced -- a far cry from traditional-style places where the sushi chef and his knife still reign supreme.

"Sushi isn't going round at random but rather it is coming out based on a number of calculations," said Akihiro Tsuji, public relations manager at Kura Corp., a major operator in a market expected to hit $5.0 billion in revenue this year, according to industry figures.

"Though traditional, sushi is stuffed with high technology. You can't operate low-price revolving sushi restaurants without databases and scientific management," he told AFP at a Tokyo outlet.

Kura has invented a serving device called "sendo-kun", which roughly translates as "Mr Fresh", a plate with a transparent dome that opens automatically when diners select the dish.While the hood keeps the sushi moist and clean, it also contains a microchip telling managers what kind of fish are swinging around on the conveyer belts and how long they have been there.

Since their birth half a century ago, kaiten sushi restaurants have evolved from selling traditional sushi into miniature museums of the food that Japanese people eat today, including battered tempura, noodles, and even ice cream.

The dishes are cheap, usually starting at around 100 yen (around $1) for two pieces of sushi.

Now, more and more outlets are equipped with dedicated "high-speed" lanes where customers can receive their order via a touch-screen menu.

Ryozo Aida, a 68-year-old university lecturer, said he visits the Kura outlet with his wife because of its "affordable prices".

"It may sound strange in a sushi restaurant, but I like tempura," he said as he jabbed his fingers at a touch-screen panel.

Inside the kitchen, screens show how many adults and children are dining and roughly how long they have been in the restaurant.

"Even if all the 199 seats here are occupied, how much sushi we need will differ depending on how long they have been at the table," Tsuji said.

The system combines real-time data with information about how many items were consumed in similar circumstances in the past, displaying results for kitchen staff.

Complementing on-the-spot efforts, the Kura chain also has a remote assistance system serving its network of more than 300 outlets.

In-store cameras feed images to dozens of supervisors who move from restaurant to restaurant with laptops -- while others watch from monitoring centres -- to advise restaurants instantly if there is enough food and the right mix of offerings on the conveyer belt. The cameras can zoom in on sushi to make sure it is laid out in regulation elegance -- although they don't monitor customers' faces for privacy reasons.

At another outlet run by Genki Sushi's "Uobei" brand in the fashionable Tokyo district of Shibuya, the concept of one conveyor belt has been updated. All 90 seats face counters with three decks of "high-speed" lanes delivering sushi directly to the person who ordered via multi-lingual touch screen.

Accuracy and speed is the name of the game with the store targeting delivery in under a minute.

"As we looked at how fast we can deliver what's ordered, we came up with this system," said Akira Koyanagi, district manager for Genki, adding that it also cuts down on wasted food.

All this high technology costs money, but sales at kaiten sushi restaurants have grown 20 percent over the past five years with the industry expected to rake in nearly $5.0 billion this year, according to research firm Fuji-Keizai Group.

A key challenge, however, is that Japanese people are eating less fish and more meat these days as world prices rise due to strong demand in the United States and Europe.

Listen to the latest songs, only on JioSaavn.com
"Procurement is getting tough," said a Genki Sushi spokesman.

Picture/AFP: Akihiro Tsuji, a public relations manager of Kura Corp. shows off a serving device called "sendo-kun", a plate with a transparent dome-like hood which opens by itself as diners take the dish at the company's sushi restaurant in Tokyo.