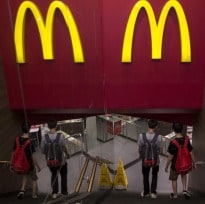 McDonald's is in need of a secret weapon that will help boost sales and bring back lost customers. Their sales report for August works as a wake up call and reflects just how bad the situation really is. They've reported a 2.8% drop in sales the U.S. same-store sales in August, 0.7% in Europe and an unfortunate 3.7% drop in global sales. (More: McDonald's August Sales Hurt by China Scandal)

To counter this drop, the world's largest restaurant chain is looking to trademark the term 'McBrunch". A McDonald's spokeswoman, Lisa McComb confirmed that they had filed a federal trademark registration but added "We routinely file intent to use trademark applications as a regular course of business. We can't share details at this time as to how the trademarks may or may not be used."

Although the move has been officially confirmed, we're yet to see how the trademark will be used. It is said that back in 2001, the brand had applied for the same trademark but eventually abandoned it.

Apart from dropping sales, aggressive competition could also be a reason for this move. Other well-known fast food franchises like Burger King, Taco Bell and Dunkin' Donuts have currently been revving up breakfast options to lure more customers. Taco Bell's new Biscuit Taco is an example of the same. One can also go back to the time when Burger King was testing its brunch menu studded with its signature Whopper burger, non-alcoholic mimosas and a BK Ciabatta Breakfast Sandwich. The venture tumbled however the chain brought back the Whopper burger in its "Burgers at Breakfast" programme introduced this year in May. IHOP has also come up with its new "Waffullicious Waffles" baked with bacon and cheese. McDonald's has widely been experimenting with its menus - including breakfast menus- globally, according to the local taste and preferences. Some of the examples being McMorning that is a new inclusion in their Croatian menu, Breakfast Roll introduced in Ireland, Tsukimi burger to cater to the Japanese palate and Veg Pizza McPuff for the fusion loving Indians.

Whether or not this move will give any respite to the fast food giant is yet to be seen, but as for now, McDonald's has food lovers guessing.