'Mud Cake' - A Delicacy Made With Mud in Poverty Stricken Haiti 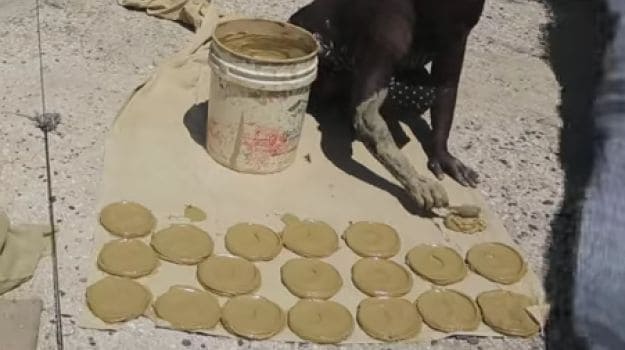 The next time you scrunch up your nose at what's on the table, chew on this - if you lived in Haiti, one of the poorest nations on earth, the best delicacy on the table (if there is a table) could possibly be 'Mud Cakes'. No, this is not a fancy term for fudgy chocolate cake, it literally refers to crunchy cakes made with mud.

The population is largely constituted of descendants of African Slaves who gained independence from France in 1804. However, civil unrest, poverty and natural disasters have left the country crippled. In fact, it is the poorest country in the Western Hemisphere. In addition, the country is still recovering from a massive earthquake that hit it in 2010.

Once touted as a Famine Legend, it is reported that this is ground reality in Haiti. These mud cakes are made by mixing a special type of mud with salt, margarine and water. They are then stirred into a 'batter', spooned onto large sheets and sun dried. In the local language, these are called 'Galette'. The locals also believe this mud to be rich in minerals and have medicinal properties and thus they do not eat these only when famished. For years, pregnant women in Haiti have been consuming these mud cakes in an attempt to get more calcium in their bodies. Whether it is truly a source of calcium or any nutrition at all, is yet to be proven. In Cité Soleil, one of Port-au-Prince's poorest slums, making this clay-based food is a major income earner. Mud cakes are possibly the only inflation-proof food available to Haiti's poor.

CommentsWhether it be for medicinal reasons or just to keep starvation at bay, it is a humbling thought that somewhere in the world, people are living by literally eating mud. This, especially in times when as much as 1.3 billion tonnes of food gets wasted across the world, a staggering one-third of all food produced for human consumption. If one could find a way to somehow bridge the gap between food wastage and the under-nourished, perhaps that would be 'development' worth being proud of.