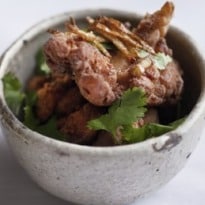 Ingredients come and go, but in the past couple of years, a handful of new ones have taken up a permanent place in my kitchen. This last year, five ingredients, spice mixes and flavourings made the leap from "fun things to play with" to a much-loved part of my everyday cooking. They include a soft fragrant spice mix; a startling fruit; a blend of herbs and seeds; and a seasoning that is hot and sweet. There is also a fresh ingredient whose flavour is difficult to pin down.

Some of these are available from high-street supermarkets, others from ethnic food shops and almost all are available online. They are all well established within their own cuisines, but haven't, till now, been easy to find in UK shops. Many of them may be already in regular use in your kitchen. But all are recent additions to my cooking that I believe deserve a much wider audience.

The yuzu is small Japanese citrus fruit with a flavour that is often described as poised between lemon and grapefruit. Whatever, it is a delightful, sweet-sharp fruit whose juice is sold here in bottles. Occasionally you may find fresh fruit in Japanese food centres. It is my tip for the most likely ingredient to become ubiquitous over the next few years. And that will suit me just fine.

Buy it for sharpening up a marinade; adding a deep citrus flavour to soy sauce-based dips for tempura or sushi.

Get it from Japanese food shops. (It is rather expensive, but a little goes a long way.)

Pour the light soy sauce into a sealable plastic bag, add the mirin and the freshly grated ginger.

Remove the skin from the drumsticks and slice the flesh from top to bottom to reveal the bone. Carefully cut the meat away from the bone in one piece and drop into the bag of marinade. Seal the bag and leave the chicken to soak in the seasoned soy and mirin for an hour or more. Overnight won't hurt.

Peel the thumb of ginger and cut into matchstick-size strips. Season the rice flour with salt and a little black pepper and spread it thickly on a plate or shallow bowl. Warm the oil to 180C.

Remove the chicken from its marinade and drop each piece into the seasoned rice flour, then lower carefully into the hot oil. Fry for 4 or 5 minutes until the outside is pale amber and lightly crisp. It is best not to overcrowd the pan, so cook them in two batches, and drain each on kitchen paper.

Fry the shredded ginger till golden and remove with a draining spoon. In a small bowl, mix the dark soy sauce and the yuzu juice together. Give the chicken a last quick fry to crisp it then serve with coriander leaves and the dipping sauce.

Galangal looks a little like ginger, but tastes very different, having none of the root's citrus notes. Paler, smoother and often with pink tinges to its plump ivory rhizomes, galangal is used in Vietnamese, Thai and Indonesian cooking.

Buy it for adding to a Vietnamese curry; including in a marinade for beef or pork; or for clear fish soups with crab or prawns.

Get it from Chinese and south-east Asian food shops and some of the larger mainstream supermarkets.

Peel the squash, discard any seeds and fibres and cut the flesh into small dice roughly 2cm square. Warm a little oil in a frying pan, add the cubes of squash and cook until lightly browned on all sides.

Pour in the coconut milk and stock and bring to the boil, then lower the heat to a simmer. Add the grated galangal and the spring onions, season with salt and black pepper and continue cooking until the squash is tender and on the point of collapse.

Wash and roughly shred or tear the greens then push them down into the hot stew and leave them for 5 or 6 minutes over a low to moderate heat until they have wilted. Finish the stew by adding lime juice and salt to taste. You want a good balance of sour lime and sweet coconut with a little galangal in the background. Add the Thai basil and coriander just before serving.

Sirloin with miso and togarashi

There is more than one form of togarashi seasoning. The most popular is a blend of chilli powder, orange peel, Szechuan pepper, sesame and ginger. Other blends come with dried lemon in them.

Buy it for adding a light, aromatic heat to steaks, aubergines and chicken.

Get it from Japanese grocers and the larger supermarkets.

Warm a little oil and a thick slice of butter in a shallow, heavy-based pan. Season the steaks and add them to the pan once the butter starts sizzling. As they brown on the surface, almost continually spoon the butter and oil over them, turning once the underside is done to your liking.

Pour the mirin into a saucepan and warm it gently. Stir in the miso paste and the sugar. When they have dissolved, remove from the heat and stir in the togarashi seasoning.

When the steak is ready, pour the dressing into the pan, roll the steak over in it, then set aside to rest for five minutes before slicing and serving with the radish sprouts.

Za'atar, the Middle Eastern spice mixture made, at its most basic, from dried thyme, oregano, salt and sesame seeds, is often eaten with flatbreads and labneh, the strained yoghurt. Mixed with olive oil, when it is known as za'atar-wu-zayt, the mixture is then spread on the outside of flatbreads before baking. Here, I incorporate it into the breads themselves, making them particularly fragrant. I have also used this spice mix with grilled lamb, scattering it over the surface of the oiled meat during grilling.

Buy it for introducing a warm, deeply herbal note to baking and to grilled foods.

Buy it from Lebanese and Middle Eastern grocers. Some large supermarkets.

Put the flour in a large, warm mixing bowl and add the salt, za'atar and the yeast. Add the butter and most of the water, then mix with your hands to bring the mixture together. Gradually add the remaining water until all the flour is mixed in.

Put the dough on a lightly floured board and knead for 5-10 minutes. When the dough feels smooth and silky, place it back in the mixing bowl, cover it with a warm tea towel and leave it in a warm place to rise for at least an hour until it has doubled in size.

Tip the dough on to a floured surface, fold repeatedly until all the air is knocked out of it, then tear it into 8 equal pieces. Roll each piece into a ball then flatten them into discs about the size of a digestive biscuit and set aside.

Warm a dry non-stick frying pan over a moderate heat, place the bread discs in the pan, a few at a time, and cook for 10 minutes or so till they are nicely toasted and a little puffed.

Serve the warm breads with the labneh and olives, trickling a little olive oil over the labneh at the table.

Ras el hanout is a mild, gently flavoured blend of spices from north Africa that can include cinnamon, cumin, cloves, nutmeg, galangal and rose petals.

Buy it for stirring into rice, spicing couscous and mograbia and adding to tagines and casseroles.

Buy it from major supermarkets, Middle Eastern and north African grocers or online.

Bring the milk to the boil, then turn the heat down to a simmer and let the cauliflower cook for 15-20 minutes until it is tender. Remove the leaves and six fat florets and set aside, then continue cooking till the remaining cauliflower is quite soft.

Process the soft cauliflower and its milk in a blender or food processor with the butter till very smooth then return to the pan, scraping it out of the blender jug with a rubber spatula. Add the ras el hanout and a little salt and pepper to taste.

In a shallow non-stick pan, toast the flaked almonds till golden. Warm the reserved cauliflower florets in the soup for a couple of minutes then ladle into bowls, a large floret and a ladle of soup in each, and add a light dusting of ras el hanout and a scattering of hot flaked almonds over the surface.