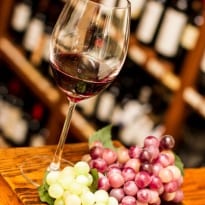 The restaurant business is booming in India, thanks to the changing eating habits of the growing ranks of its middle class, and this makes the nearly $50 billion Indian food services market a viable option for Chilean wine and sea food, says an official from the South American nation.

With plans to introduce pork, scallop, mussel, canned fruit and sea food, Nestor Riveros, Minister Counsellor (Commercial) and ProChile Trade Office chief here, told IANS: "Food market in India is on an expansion and we are interested in it."

"It's good to know that in India, a lot of people have started going out for dinner. It wasn't like this some years ago. This is very good for the hospitality industry. Back in 1998, the country had no malls, two years later they were developed here. That's the reason why I believe in the country's potential," he added.

Since the mid-1990s, Chile has exported various food items like kiwis, berries and wine to Germany, Japan, the US and Britain. Their canned peaches, cherries and fruit pulp find lots of buyers.

Now, the coastal Latin American country wants to extend its business to India.

"The country is huge. We are planning to start with cities like Delhi, Mumbai, Chennai, Bangalore and Kolkata. Then we will expand to the rest of the country," said Riveros.

"We are going to introduce pork, scallops, mussels, canned fruit and sea food, frozen food products like blueberries, which has become worldwide fashion... Chile is one of its largest producers," he added.

Chile has wide plantations of fine varieties of wine. Some of the wine producing regions of Chile are in the north that include Casablanca, Choapa and Limari and the central valley like Maipo, Cachapoal and Colchagua.

Merlot, Riesling and Chardonnay are some of their widely appreciated wines.

Willing to supply them to India, the Chilean government is looking at concessions on import duty.

"We believe we can supply a lot of sea food, agricultural produce and wine to India. But for wine, we would like the Indian government to reduce import duty. This will be good for the hospitality industry as a whole and not just for Chilean wine," added Riveros.

He also mentioned that the amount spent by a tourist here for one bottle of wine is equivalent to the amount paid for four bottles of wine in places like Singapore and Malaysia, and believes that it affects the tourists.

According to a report by the National Restaurant Association of India (NRAI) and Technopak, the size of the food services market in India is estimated at $48 billion in 2013 and it is projected to grow at a compound annual growth rate (CAGR) of 11 percent in next five years to reach $78 billion by 2018.

Chinese, Lebanese, Mexican and Italian cuisines are quite popular among the foodies here. But there are no Chilean cuisine-based restaurants in the country as of now.

Riveros hopes eating joints serving Latin-American dishes could include a few products from Chile like the wine or salmon to familiarise Indians with the cuisine, mostly a combination of Italian, Spanish and French.

Chef Sabyasachi Gorai, director of Olive Bar & Kitchen, was introduced to Chilean food products a decade ago and is now in love with it and the country.

Promoted
Listen to the latest songs, only on JioSaavn.com
"I have been cooking with Chilean produce for 10 years now. I am a chef and so my connection was more with food rather than wine. It was later when I started drinking wine that I realised they have fantastic wine culture.

Now, I am in love with the country and its people," he said.Gorai believes that the food products would do well anywhere in the country as the supply is fresh and of good quality, but the distance and cost of the produce might pose problems.

Comments"Restaurants are looking for new cuisines and better ingredients. But when you fly anything down from a place so far away, things get expensive. As a chef I am willing to experiment, but if I have to choose between products worth Rs.1,000 and Rs.2,000, I will go for the cheaper one," said Gorai.