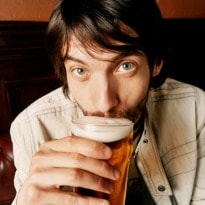 The discovery is accurate in nearly 82 percent of cases and can one day give robots a sense of taste! The electronic tongue - based on the human sense of taste - uses a generic array of sensors.

"The method did enable us to distinguish between the main categories of beer we studied - Schwarzbier, lager, double malt, Pilsen, Alsatian and low-alcohol with a success rate of 81.9 percent," said Manel del Valle from Autonomous University of Barcelona.

The researchers recorded the response generated by the array of sensors and how this was influenced by the type of beer considered.

"In other words, with generic response to the various chemical compounds involved - which generate information with advanced tools for processing, pattern recognition and even artificial neural networks - we were able to identify various brands of beer," added del Valle.

This tool could one day give robots a sense of taste, and even supplant panels of tasters in the food industry to improve the quality and reliability of products for consumption.There are, however, varieties of beers that the tongue is not trained to recognize such as beer/soft drink mixes or foreign makes.

It means the method does not recognize brands for which it was not trained, said the study published in the journal Food Chemistry.