International Beer Day 2017: This is How Your Favourite Beer is Made!

Beer has a special place in our hearts; after all it has been our chilled companion at parties, while catching up with friends or even when we just wanted to be alone watching a game or our favourite TV series 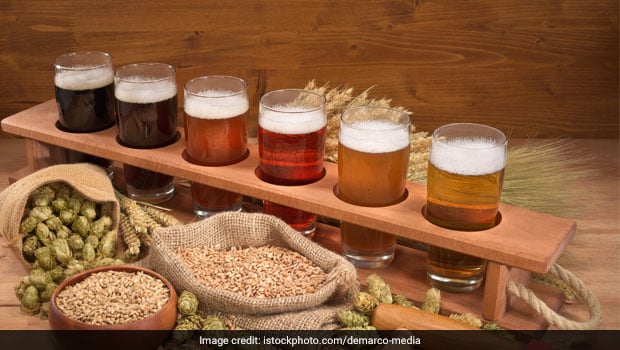 Highlights
International Beer Day is celebrated on the first Friday of August every year. The celebrations for this day have three purposes - gather with your friends, enjoy the beer, and raise a toast to those who brew and serve us great beer. The International Beer Day was founded in the year 2007 in California and over the years it has become a worldwide celebration. Beer has a special place in our hearts; after all it has been our chilled companion at parties, while catching up with friends or even when we just wanted to be alone watching a game or our favourite TV series. You may be a big beer fan, but have you ever wondered how your favourite brew is really made? We take you through the process of brewing beer.

There are essentially four ingredients used to make beer that include barley (or other grains), hops, water and yeast (contents may vary with different kinds of beer). The beer making process includes malting, mashing, boiling, fermenting, carbonation, bottling and aging. Let's discuss this in detail.

Mashing is a process that takes place in a huge vessel called tun. This is where grains are soaked in hot water for an hour or so in order to release the sugars present in them. This step activates enzymes in the grains that causes them to break down and release sugars. The water is then drained from the mash that is now full of sugar; this sticky liquid is known as wort. The process of mashing contributes in adding flavour, aroma and fermentable sugars.

The wort is now boiled for around an hour followed by adding hops in it. Hops are flowers that are primarily used as flavouring agents in the beer. They provide bitterness to balance the excessive sweetness present in the wort. They also act as a natural preservative.

Once the wort is boiled; it is kept to cool off. The process is followed by straining and filtering. The wort is then added into a fermenting vessel and yeast is added to it. From this point on, the fermentation process begins. In case of ale, it is stored in the vessel for couple of weeks at room temperature, while in case of lager; it is stored for more than a week under cold temperatures. During the fermentation process, the yeast consumes all the sugar present in the wort and releases alcohol and carbon dioxide. The carbon dioxide is released into the air and the alcohol content is retained in the beer making it boozy.

The beer that is made after all the above processes is, however, flat. The fizzy and frothy texture is attained during carbonation. This is done by inducing carbon dioxide into the beer. Another process of carbonation which is called 'bottle conditioning' involves adding a small amount of sugar to the bottles. The residual yeast will consume the sugar and naturally carbonate beer and release carbon dioxide. This natural process may take a while to complete carbonation and therefore, the latter is used commonly to make beer fizzy, if it is produced on a large scale.

The last process after carbonation is where the beer is allowed to age for a couple of weeks before giving it off for commercial use. And that's how the beer you see in front of you is made. So, what are you waiting for? Raise a toast, enjoy some chilled beer and gloat over your newfound knowledge. Happy International Beer Day!