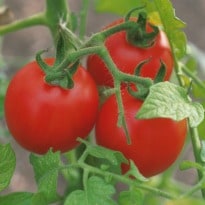 Organic tomatoes are richer in vitamin C, sugars and compounds, as compared to the conventionally grown variety, says a study.

Researchers led by Maria Raquel Alcantara Miranda and colleagues from the Federal University of Ceara, Brazil, compared the heft and biochemical properties of tomatoes from organic and conventional farms.

Promoted
Listen to the latest songs, only on JioSaavn.com
They found that tomatoes from organic farms were approximately 40 percent smaller than farm grown ones and also accumulated more compounds linked to stress resistance, the journal Public Library of Science ONE reports.

Organic farming exposes plants to greater stress than conventional farming. They suggest that this increased stress may be the reason organic tomatoes had higher levels sugars, vitamin C and pigment molecules like lycopene, an anti-oxidant, said a university statement.