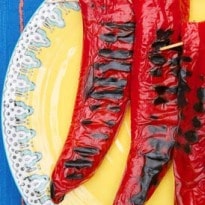 Felicity Cloake fires up the barbecue to test your recipes for sizzling over hot coals.

Thank goodness the weather held long enough to test your barbecue recipes. Even if it had rained, all these recipes (minus the Catalan salad) can be cooked on a hot griddle in the same way. But we were glad to have the fire to keep us warm. Jess Baum's Catalan salad cleverly harnessed its first flames, while its dying embers lent Gunda's pineapple a beautifully caramelised flavour. But Laura's stuffed peppers - sweetly charred flesh and salty, herby cheese - won everyone's hearts. But then, there weren't any kebabs left either...

This brilliant vegetarian dish is totally delicious and incredibly easy. It actually uses the bit of the barbecue that usually gets wasted at the start: the flame. Make this before you start cooking anything else.
Jess Baum, Bristol, themotherinlawskitchen.com

1 Light the barbecue. As soon as there's a flame (but after any firelighters have burned out) place all the veg on the grill. Turn occasionally until they are charred and soft. Smaller or softer vegetables are often ready quicker.

2 Leave the charred veg until cool enough to handle, then peel the skin off the aubergines, peppers, garlic and onions, and discard, along with any stalks and seeds.

3 Either with hands or scissors, tear or cut the flesh of the vegetables into a bowl, adding the tomatoes whole, plus the chopped herbs.

4 Next, chop up the anchovies and add to the mix, along with the oil and vinegar. Season to taste. Serve warm.

Served on a beach somewhere exotic, or simply at home if you want the taste to conjure distant shores, these super-quick sweets are a delight.
Gunda Windmueller, Cologne, Germany

1 Mix the lime juice with the sugar, cut the pineapple into slices and brush with the lime-sugar mix.

2 Put the slices on the barbecue and grill until light brown grill marks appear on each side. Serve with vanilla ice-cream and fresh mint.

A few years ago we were on a family climbing holiday on the Greek islands of Kalymnos and Telendos. When it got too hot to climb, we retired and tucked in to souvlakia; spicy barbecued lamb chunks parcelled in mini pitta breads, before chilling on the beach. This is the closest I have been able to replicate their delicious taste.
Diane Kitchen, Ilkley

1 Grate the onion into a bowl and blend with the olive oil, crushed garlic and spices. Add salt and black pepper.

2 Add the cubes of lamb to the slushy mixture and toss until covered. Leave to marinade for an hour or longer.

3 If you are using wooden skewers, soak them in water for around 15 minutes first. Shake the excess marinade from the meat and then thread 5-6 pieces on to skewers.

4 Barbecue over hot coals, turning regularly until they're a bit charred on the outside, but juicy on the inside.

5 Meanwhile, wrap the mini pitta breads in tin foil and put directly on to the coals to warm through.

6 To serve, split open the pitta, fill with a little iceberg lettuce, pull the cubes of lamb off the skewer and stuff them in on top of the lettuce. Drizzle with 2 tbsp yoghurt. Add some finely chopped raw onion and extra hot cayenne pepper, if you like, and think of Greece.

Stuffed peppers with feta and herbs

Suggest a barbecue to some people and they think of meat, but even hardened carnivores will like these peppers.
Laura Aggelou, Evia, Greece

1 Rinse the peppers and remove the seeds.

2 Crumble the feta into a bowl, add the herbs and garlic, season with black pepper, then stir well. Use this mixture to stuff the peppers. Seal the peppers with a toothpick.

3 Barbecue the peppers until the skin turns black and soft. Remove from the grill and peel off the black skin.

4 Put them on a plate and drizzle with olive oil and vinegar to suit your taste .

Sumac is a typical Middle Eastern spice, which adds a lemony flavour to dishes. The buttermilk acts as a great tenderising agent thanks to its acidity, as well as moistening the chicken. You can easily substitute other meats or vegetarian options such as paneer or halloumi, if you prefer.
Natalie Wong, London, twinnydip.blogspot.com

2 Meanwhile, prepare the dipping sauce by mixing all the ingredients together well.

3 When you're ready to cook, shake off the excess marinade and thread the chicken, pepper, and onion chunks alternately on to skewers, so you have two of each on each skewer.

4 Cook on a hot barbecue for about 5 minutes per side, or until well cooked through and nicely charred on the outside. Serve with the dipping sauce in a bun or pitta bread.

My dad and brother both glory in wielding the barbecue tongs. When the two men meet over the coals, it is wonderful to watch how each tries to assert his right to the throne. This prawn recipe is a family favourite, made by both. If the rungs of your grill are too far apart, cook the prawns using a steel plate placed on top.
Bronwyn Wolfe, London

1 Put the prawns in a bowl and add the garlic, oil and black pepper. Mix thoroughly.

2 Tip on to a very hot plate or carefully on to the grill and watch them sizzle. As the prawns start to change colour, flip them over with tongs.

3 When they are mostly pink, scoop them into a bowl and eat immediately with a spritz of lemon. If it rains, use a very hot, ridged cast-iron pan - it's almost as good.

Peppers stuffed with feta and herbs. Photograph: Anna Gordon for the Guardian