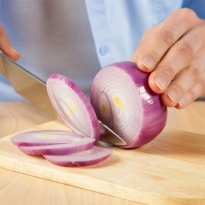 Scientists have developed a new type of 'tearless' onions that produce less of the protein blamed for making eyes burn and tear up.

The 'tearless' onions not only prevent eyes from burns and tears, but also fight against cardiovascular disease and weight gain, scientists say.

Researchers Colin C Eady and colleagues noted that the onion has a unique chemistry that leads to its tear-inducing effects when cut. Eady's team has developed a version of onions, which instead makes a sulphur compound similar to one found in cut garlic that may be the key to its cardiovascular benefits.

Many people eat garlic cloves or take it as a nutritional supplement in pill form to reduce the clumping of platelets in the blood, which can lead to blood clots and clogged arteries. Garlic also has been shown to reduce weight gain. They wanted to know whether the new onion might also have similar positive effects on health.

The scientists found that in lab tests, extract from the tearless onion significantly reduced platelet clumping, compared to regular onions or even garlic. Other results showed that the new onion had about the same anti-inflammatory properties as the original. Also,
preliminary testing in rats showed that the tearless onion could help control weight gain-more so than regular onions or garlic, according to the study published in The American
Chemical Society's Journal of Agricultural and Food Chemistry.

Recently, onions have been grown with repressed lachrymatory factor synthase (LFS) activity, which causes these onions to produce increased amounts of di-1-propenyl thiosulfinate, an isomer of allicin.

Promoted
Listen to the latest songs, only on JioSaavn.com
Investigation into the key health attributes of LFS-silenced (tearless) onions demonstrates that they have some attributes more similar to garlic and that this is likely
due to the production of novel thiosulfinate or metabolites. The key finding was that collagen-induced in vitro platelet aggregation was significantly reduced by tearless onion extract over normal onion extract.