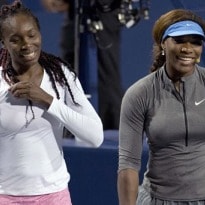 Could cooking be the new doubles endeavor for Serena and Venus Williams?

The two tennis superstars giggled and teased each other as they joined celebrity chef Marcus Samuelsson in a cooking demonstration Thursday as part of the annual "Taste of Tennis" event, one of the many festivities leading up to next week's U.S. Open championships in New York City.

The Williams sisters joined Victoria Azarenka and other tennis stars as they promoted culinary delights at the event, which benefits the James Beard Foundation. The Williams sisters joked about borrowing each other's clothes and talked about their favorite U.S. Open moments (when each won her first championship) as they helped Samuelsson make tacos and a cocktail. (Venus had a vegan taco while Serena tasted a fish one.)

Earlier in the evening, Serena Williams boasted about her own cooking skills: "I make anything and everything. ... I'm most proud of my raw tacos. I do it with nuts. I dehydrated the nuts and created the raw tacos, it was delicious."

Promoted
Listen to the latest songs, only on JioSaavn.com
Serena says her eating habits have changed over the years to become more healthy, but thinks her change reflects a national conversation about food.

"People as a whole just know more about health and are conscious about what to eat," she said in an interview. "I am definitely eating more greens and drinking more greens, and that kind of thing."

CommentsSerena Williams is the defending U.S. Open women's champion and is seeded No. 1 at the tournament, which kicks off Monday.