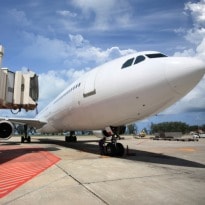 Dozens of people were rushed off a Qantas flight for medical treatment in Sydney on Thursday after a stomach bug struck mid-journey, triggering a mass vomiting episode.

Qantas said a "number of passengers travelling in the same group on QF28 (between) Santiago and Sydney became unwell with a gastro intestinal illness" on the 14-hour journey to Australia.

Media reports said between 20 and 30 passengers were vomiting as they disembarked in Sydney and were met by a fleet of ambulances.

"It is believed the illness was contracted before boarding the aircraft and symptoms became evident during the flight," Qantas said in a statement.

"The aircraft has been met by medical staff to look after the unwell passengers."

As a precaution, Qantas said all other passengers on the flight were advised to monitor their health closely over the next 24-48 hours.

Listen to the latest songs, only on JioSaavn.com
Health authorities said they had been advised that "26 passengers returning on a Qantas flight from Santiago, Chile, developed vomiting and diarrhoea on the plane, consistent with norovirus infection, a common cause of outbreaks of gastroenteritis in Australia and elsewhere"."New South Wales Health has provided Qantas with a letter and factsheet about viral gastro to distribute to all departing passengers, as well as advice for cleaning and cabin staff," the state's health office said in a statement.

CommentsIt said the sick group was assessed by paramedics and escorted out of the airport "with minimal exposure to other passengers" after they were cleared to go home.