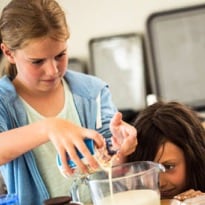 A perfect summer recipe to make with kids aged five and over.

We used a stainless-steel storage tin and an old biscuit tin to make this. We also chose the hottest day of the year to test the recipe - and ran out of ice. We didn't stir the mix well enough, so when we split it, the second batch ended up with all the sugar. The girls - Mathilde, 9, and Georgia, 10 - were bored after five minutes of "churning", leaving muggins to kick two tins around the garden. Despite this, the result wasn't bad at all. "That's amazing," was Georgia's verdict. "It actually tastes of ice-cream."

Pour the creams into a jug, add the sugar and vanilla, and stir well. Pour into a zip-lock bag, zip it shut, then put it inside the second bag (in case one tears in the churning).

You need to move the can around for 25 minutes, to churn: roll it down a hill, along a footpath or kick it very gently. Take off the lid, carefully remove the bag, and ta-dah! Creamy ice-cream.

An edited extract from The Kids Only Cookbook by Sue Quinn (Quadrille, £12.99).