Yo! Sushi Drone Delivery - Will It Take Off? 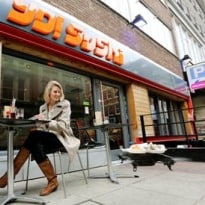 First came conveyor-belt service, now the chain has developed its "first flying serving tray". So could a test flight bring the food safely down?

Chunks of prawn cracker are flying through the air, next comes an ominous crash. It's not the best start, but this, I am told, is the latest innovation in food delivery - service by drone.

With their reputation as controversial killing machines, it's not the most obvious fit, but food outlets seem intent on proving such warlike techonology has an altogether more civilised use - if only they could get them to behave. Earlier this month, Domino's Pizza released a video of what it called its "DomiCopter", a pizza-delivering lightweight aircraft - and now YO! Sushi is developing its "first flying serving tray", to be rolled out next year. It has a lightweight carbon fibre frame with four propellors, two fixed cameras and its own Wifi connection, and is controlled using an iPad app. But when I visit the chain's Soho restaurant to have a look at how the trial is going, there are a few teething problems.

Not yet capable of carrying the weight of the burger it was designed to serve, it is being tested outside with polysterene food and prawn crackers. But the inexperienced pilot is finding it hard to get it off the ground, and almost impossible to control once it's hovering.

Instead of flying serenely in front of him and landing gently on the table, the machine drunkenly lurches around at knee height, crashing into camera tripods and chairs or just the ground, as the pilot mutters darkly about the wind factor and low batteries. Its rotor blades are said to be powerful enough to speed it along at 20mph, at a range of 50m, but they also mean that when the tray tilts and the prawn crackers fall out they are chopped and sprayed through the area.

As it heads dangerously close to the road, and passers-by swerve out of the way, I am told that it worked perfectly in the workshop. But its unpredictable behaviour is at least drawing the crowds. As it hits the floor once more, Michael Lim, 21, from London, is entranced.

"I think it's amazing and would love it to serve me," he says. "As long as the rotor doesn't hit me." Yo! Sushi customer Deeviya Meir, 25, is equally forgiving. They are already fans of the chain's distinct conveyor-belt service - which allows customers to pick dishes as they move past them. "It definitely grabs your attention," says Meir. "And it does look good."

But Claire Lubert, 35, sounds a sensible note of caution, "I would have to wait to see how it works with wine - or miso soup - first."