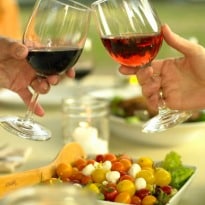 And for those who already have kidney disease, which puts one at higher risk for cardiovascular problems, moderate wine drinking might help the heart, the researchers added.

"Those [with healthy kidneys] who drank less than one glass of wine a day had a 37 percent lower risk of having chronic kidney disease than those who drank no wine," said study author Dr. Tapan Mehta, a renal fellow at the University of Colorado Anschutz Medical Center, in Aurora.

"Those with chronic kidney disease who drank less than one glass a day had a 29 percent lower risk of cardiovascular events [than those who drank no wine]," he added.

Mehta is due to present the findings Wednesday at a National Kidney Foundation meeting in Las Vegas. Studies presented at medical meetings are typically viewed as preliminary until published in a peer-reviewed journal.

Mehta and his colleagues looked at data from the 2003 to 2006 National Health and Nutrition Examination that included nearly 6,000 people. Of those, about 1,000 had chronic kidney disease.

Having chronic kidney disease increases the risk of cardiovascular disease. About 26 million Americans have chronic kidney disease, often caused by diabetes and high blood pressure, according to the National Kidney Foundation. Previous research has found that moderate drinking is linked to heart benefits.

That is why Mehta decided to look at both questions: whether moderate drinking could help those with chronic kidney disease lower their risk of cardiovascular problems, and whether it can help those with healthy kidneys keep them that way.

The polyphenols found in wine have anti-inflammatory and antioxidant properties, which may help explain the protective heart effects, he said.

Mehta couldn't say from the study if red wine is better than white, as those who responded did not say which type they drank, just if they drank wine and how much they drank.

He suspects, however, that red would most likely be better, as it has been linked previously to being heart-protective.

The study suggests wine is protective against kidney disease and, in those with kidney disease, heart disease, ''but we cannot make any firm cause and effect conclusion," Mehta said. While the study found an association, it was not designed to prove a cause-and-effect relationship.

The new findings are consistent with previous research, said Dr. Gary Curhan, a professor of medicine at Harvard School of Public Health and Harvard Medical School.

Curhan's team has found there may be an inverse association between moderate drinking and kidney problems. While the new study is a cross-sectional one, looking at a snapshot in time, Curhan's research looked at how drinking affected kidney function over time.

Both Mehta and Curhan emphasized that moderate alcohol consumption is key. Mehta said they didn't have enough people in his study who regularly drank two glasses of wine a day to determine the effects of drinking more wine.

For those who don't drink alcohol, Curhan noted, the new research is no reason to start.

CommentsDisclaimer
All views are strictly personal opinion of the authors. The same should not be construed as the opinion or policy of NDTV. Always do your own research on products and companies before using a product you choose. NDTV, its affiliates and its management does not claim responsibility for any of the views/products/ or companies discussed on this site.