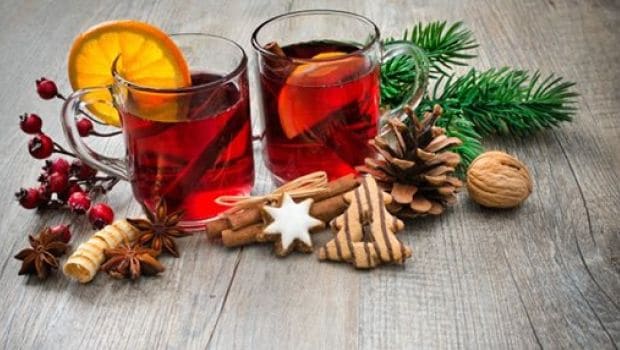 Highlights
I still remember my first visit to Switzerland a few years ago. This wasn't a typical summer sojourn but a trip that was planned smack in the middle of winter and the Christmas Season. The main agenda was to criss-cross some of the country's fabled winter destinations and skiing hubs like St Moritz. Along with all the cross country skiing, the most fascinating part of that visit were the Christmas markets. Some that were very traditional and others that sprung up in busy town squares and even railway stations. It was at one of these markets that I first discovered mulled wine.

There are few things that can comfort you like a warm glass of mulled wine on a cold night and it took just one swig for mulled wine to become my chosen nightcap for the rest of that trip. More recently I was in Berlin around Christmas where I was invited to a pre-Christmas dinner and where I rediscovered the pleasures of a soothing cup of home-made mulled wine. It's called Gluhwein in the German speaking parts of Europe. Gluhwein translates into 'glow wine' because this warm beverage is believed to lend your cheeks a pink glow.

Almost every trail of wine leads back to the Romans who were credited with establishing viniculture as we know it, as early as the 2nd Century AD. Mulled Wine dates back to the same period and the first known recipe for Mulled Wine finds a place in one of the first known British cookbooks (or scrolls in this case) - The 14th Century Forme of Cury, that was published during the reign of King Richard II.

A mull usually refers to a beverage that is warmed with spices and sugar. I noticed the spice mix change from one winter market to the other but cinnamon and cloves were almost always in the mix. It's common for every home to add their own set of spices; at my friend's home in Berlin for instance the red wine is mulled with oranges, cinnamon, ginger, nutmeg and star anise while I've sampled mulled wine with spices as diverse as cardamom, bay leaves and vanilla pods. There's also Feuerzangenbowle (German for fire-tongs punch), that is an integral part of German Christmas and New Year celebrations where a rum-soaked sugar-loaf is 'flambeed' and gradually drips into the mulled wine.

It boils down (literally) to your preference. It's the same for the wine that you use. I would recommend that you use a wine that you'd like to drink. It's usually a red wine - a Merlot or Cabarenet Sauvignon, but you could also use a cheaper table wine. It's not entirely uncommon in Germany to use a white wine for your mix. If you're confused about what spices to use (and the proportion), you could order a mulling spice mixture (available on quite a few online portals) for your mulled wine fix. These spices are used in other mulled drinks like an apple cider and you could also experiment with warm fruit juices in the winter.

How to Make Mulled Wine

Mulled wines are almost synonymous with Christmas markets and the Christmas season in most parts of Europe. Vin Chaud in France, Svarene vino (boiled wine) in the Czech republic and Glogg (both alcoholic and non-alcoholic versions) across Scandinavia - each part of Europe has its own interpretation of mulled wine. The citrus fruit, spices, red wine and sugar are a constant but you can use your imagination to tweak the recipes. I stumbled upon an authentic version of mulled wine at the Park Hyatt in Chennai.

Teuku Syafrulsyah, the hotel's Indonesian Executive Chef, gathered the recipe from a German chef and is particular about sourcing juniper berries for his version. You can try this relatively simple recipe at home. Tis the season to be jolly and also the season to savour a warm mug of mulled wine.

1 orange, studded with cloves then cut into thin slices

1. Place the sugar in a pan with 450ml of water. Add the cinnamon stick, juniper berries, nutmeg, one orange slice and the lemon slices.

2. Heat gently (Do not boil at a high temperature) to dissolve the sugar. Bring to the boil, then turn off the heat and stand for 10 minutes to allow everything to infuse.

3. Add the liqueur and red wine and heat through gently, then pour into a jug. Add the remaining orange slices and serve.

- If you can't find juniper berries, you could add 4-5 pepper corns.

High-Protein Diet: Hara Chana (Cholia) Masala Is Ideal For Winters (Recipe Inside)
Shilpa Shetty's 'Sunday Vibe' Was All About Gobi-Gajar-Shalgam Achar - Pictures And Recipe Inside