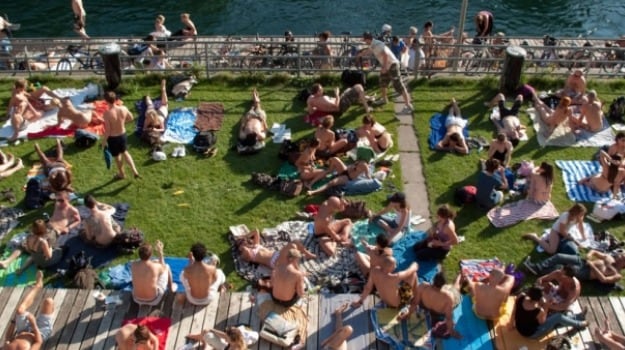 Moving immediately into the shade does not stop sun damage as UV rays can continue damaging skin cells hours after exposure.

Damage to skin cells continues for hours after spending time in the sun, according to research that uncovers a new link between sun exposure and cancer.

The discovery that some of the most serious damage to skin cells may be occurring in the dark raises the prospect of new “evening after” lotions that would help limit the effect and reduce the risk of skin cancer.

Vitamin E was identified by scientists as a promising candidate for helping to “quench” the after-effects of a hot day at the beach.

Unexpectedly, the source of the “dark damage” was found to be melanin, the pigment in skin cells that normally acts as a shield against ultra-violet (UV) radiation.

Prof Douglas Brash, who led the research at Yale University, said: “If you look inside adult skin, melanin does act as a shield. But it is doing both good and bad things.”

The latest work reveals that UV light produces a cascade of chemical reactions, including the production of a “super bleach”, which reacts with melanin causing one of its electrons to be “excited”. The melanin then deposits its extra energy in the surrounding tissue. If a strand of DNA happens to be nearby, it can absorb the energy causing the double helix strand to bend, preventing the genetic code from being read correctly.

“Melanin participates in the DNA-damaging part of this reaction only for a few minutes, maybe only a few microseconds,” said Brash.

Exactly the same type of damage – called a cyclobutane dimer (CPD) – is already known to occur directly during sun exposure as the UV rays hit DNA strands and scramble the letters of the genetic code into mutations. The more mutations skin cells accumulate over time, the higher the likelihood that one of them will turn out to be cancerous.

However, until now, the damage was thought to stop as soon as a person took shelter in the shade.

The latest study, published in the journal Science, monitored skin cells to reveal that mutations carried on appearing for about four hours after a session of sun exposure equivalent to a “just perceptible” sunburn.

When the scientists investigated further they discovered melanin’s crucial role in this process.

In the study, the scientists showed that potassium sorbate, a widely used food preservative, was effective at blocking the ongoing damage, although this isn’t “what you’d want to put on your skin”, according to Brash. Vitamin E, which was also effective, would be a better candidate and might explain why it is so effective in suncreams and moisturisers. It was previously thought that Vitamin E simply worked by blocking UVB rays.

Áine McCarthy, of Cancer Research UK said, “The discovery that UV radiation can continue to harm our DNA hours after exposure raises the possibility of developing future products that might reduce this ‘dark damage’. For now, the best way to cut your risk of skin cancer is to enjoy the sun safely and avoid sunbeds.”

About 100,000 people are diagnosed with non-melanoma skin cancer each year and about 13,500 with melanoma, which is rarer but causes far more deaths.

The findings could help explain the different risk factors for the two different types of skin cancer – melanoma is associated with brief intense sun exposures, the kind that cause blistering sunburn, whereas other skin cancers are normally linked to long-term moderate exposure. It is possible that more “dark damage” may occur depending on whether sunlight is absorbed over a longer time period.