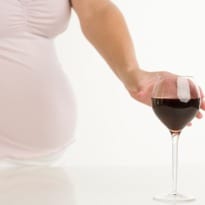 A new study has suggested that indulging in a drinking binge even once during pregnancy could have long lasting effects on the child's behaviour in later years.

According to the Danish study, the infants exposed to one or two binges of alcohol in the womb were more likely to have short attention spans and be badly behaved on turning seven, Daily Mail reported Saturday.

A binge was classified as two-and-a-half large glasses of wine or more. This could concern many women who enjoy drinks with friends before realising they are pregnant.

The study tracked the health of over 30,000 babies born to women who had been asked about drinking during pregnancy. A binge was defined as downing at least 7.5 units of alcohol in one session, with a large wine containing three units.

Promoted
Listen to the latest songs, only on JioSaavn.com
According to researcher Janni Niclasen of Copenhagen University, if one exposed the child to one or two binges in early pregnancy, the brain would be less flexible. "When that child grows up and is put in a difficult situation, it might make a difference to the way that child will cope."

"Women really shouldn't panic. They should think about what they eat and drink for the rest of their pregnancy," she said, while warning that binge drinking early in pregnancy is known to raise the risk of miscarriages, stillbirths and birth defects.