Excluding Women from Clinical Trials is Hurting our Health 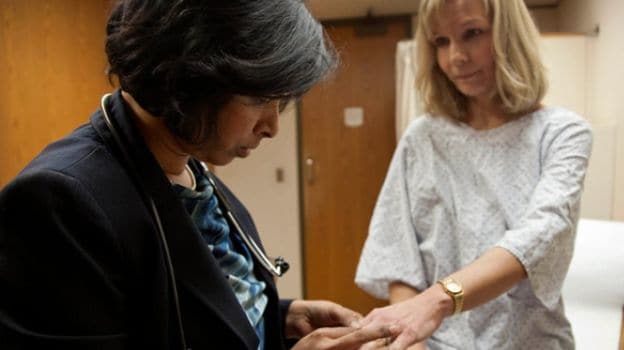 Cardiovascular disease is the number one killer of US women, but only a third of cardiovascular clinical trial subjects are female. Photograph: Bloomberg/Getty Images

When it comes to health research, large gender gaps limit how much we know about the difference between women’s health and men’s.

According to the Institute of Medicine, every cell in our bodies has a sex, which means men and women are different at a cellular level. That also means that diseases, treatments, and chemicals might affect the sexes differently. And yet there’s a long and storied tradition of ignoring gender when it comes to health research.

Female subjects have historically been excluded from toxicology or biomedical research, says Tamarra James-Todd, an epidemiologist at Harvard Medical School. While progress has been made since 1993, when the National Institutes of Health mandated that women and minorities be included in any government-funded health research, there’s still a long way to go.

In a 2014 report, researchers at the Brigham and Women’s Hospital in Boston chronicled the exclusion of women from health research and its impact on women’s health: “The science that informs medicine – including the prevention, diagnosis, and treatment of disease – routinely fails to consider the crucial impact of sex and gender. This happens in the earliest stages of research, when females are excluded from animal and human studies or the sex of the animals isn’t stated in the published results. Once clinical trials begin, researchers frequently do not enroll adequate numbers of women or, when they do, fail to analyze or report data separately by sex. This hampers our ability to identify important differences that could benefit the health of all.”

Related: Defining moments: share an experience that has shaped your values

How the research gap plays out in real life

Major endocrine changes throughout a woman’s life, including puberty, pregnancy, and menopause, have been directly linked to increased risk for depression. Women also metabolize drugs differently than men. Yet fewer than 45% of animal studies on anxiety and depression use female lab animals.

Two thirds of the 5.1 million people currently suffering from Alzheimer’s are women, and an American woman’s overall lifetime risk of developing Alzheimer’s is almost twice that of a man. The prevailing thinking in the field is that this is simply because women live longer. But Alzheimer’s researchers have just begun looking past the assumption, and early discoveries indicate that the impact of hormonal changes at menopause and sex differences in gene expression may be involved as well.

Finally, lung cancer, which kills more women every year than breast, ovarian, and uterine cancers combined, is strikingly prevalent in young, non-smoking females, and researchers have found that sex hormones, particularly estrogen, influence lung cancer development and mortality. The inclusion of more women in clinical trials has resulted in evidence that some lung cancer treatments work better for women than men.

However while more women are participating in lung cancer clinical trials than before, they remain less likely to enroll in trials than men, a fact that holds particularly true for minority women. Even when studies do include women, they often fail to stratify data by sex or include information about hormone status or any other gender-specific factors.

One of the report’s authors, Dr Paula Johnson, executive director of the Mary Horrigan Connors Center for Women’s Health and Gender Biology at Brigham and Women’s Hospital in Boston, says these are only a few of the gaps, with the same trends playing out across the spectrum of health research.

“We’re in the thick of sex and gender difference research from a basic level all the way to applying that research, in terms of translating clinical findings into care models and how we measure outcomes,” she says. “ What we’re really missing is the fact that this is an approach and a lens through which it’s critical to not only do science writ large but also one through which we need to look at drug research, toxicology research, and so forth. It’s a critically important lens.”

Some researchers don’t want to acknowledge differences between men and women, James-Todd says.

“It’s taboo in some circles to suggest that we’re genetically different from each other, and yet we are,” she says. “Sex is a biological construct. There are sex differences between men and women, and how those differences manifest and what happens, from a genetic level to how the body operates, is different.”

Related: Disposable tampons aren't sustainable, but do women want to talk about it?

Broadening the scope of study

Even when women are included in toxicology studies, it’s not clear if those studies are sufficiently wide ranging. While tests evaluate mammary tumors for chemical exposure, for example, they don’t study the impact of chemicals on mammary gland development. Given that teenaged girls use more hygiene products than adult women, this could be significant.

The US Environmental Protection Agency, for example, has occasionally voiced support for addressing mammary gland development in toxicology tests, but remains unconvinced of the validity of available testing protocols.

In November 2011, Dr Christine Olinger, a branch chief in the EPA’s pesticide programs’ health effects division, retracted the EPA’s approval of mammary gland development tests. Olinger, who is also the US national coordinator for the Organisation for Economic Co-operation and Development (OECD)’s guidelines for chemical testing, questioned the effectiveness of the testing.

“We do not believe that the proposed validation study will result in a technique that could be routinely used in a test guideline and would provide a reliable endpoint for regulatory risk assessment,” she wrote to the international standards-setting group.

The chemical industry has also questioned the need for additional tests, as have some promiment researchers.

“There is really no tendency for a chemical to impact one gender differently than another unless the chemical behaves like a sex hormone or targets a specific organ or tissue that is different in males and females (for example, reproductive organs),” says Dr Michael DiBartolomeis, chief of the Exposure Assessment Section in the California public health department’s environmental health investigations branch.

Progress is happening, but remains slow

Government policies requiring the inclusion of women and minorities have brought some change. They have led to the formation of women’s health programs at various government agencies, for example, which has led to some big breakthroughs, including much of the available information about how cardiovascular disease affects women differently than men, and the various risks of hormone replacement therapy.

However, even in government agencies with strict and specific policies around including women – such as the National Institutes of Health, the Food and Drug Administration and the Centers for Disease Control, those policies are not always being strictly enforced.

Johnson points to two recent studies on cholesterol-reducing drugs as an illustration of how far we still need to go. “These were big, longer-term, one-year outcome studies, which are critically important, and they included women but there was no information published about how women did on the drug versus men,” she said. “That’s important because we know that women have different side effects – so this might be a good drug for women, but we don’t know.”

Related: Not so pretty: the high health cost of women's products

This year, both the NIH and the FDA announced intentions to draft new policies and guidelines aimed at incorporating sex differences in research and regulation.

The FDA’s decision came on the heels of the discovery that American women were routinely overdosing on Ambien. After running driving simulations and tests on how much of the drug remained in the body the next morning, the FDA last year cut the recommended dosage of Ambien for women in half.

It was an unusual move for the agency, and it was followed the next month by the announcement that the FDA takes sex differences in research seriously and expects pharmaceutical companies and medical device companies to provide data on both men and women.

But it’s still unclear what the coming changes will look like or how effective they will be. Earlier this year, the NIH halved the single grant it provides to train young scientists how to include sex and gender in research, which Johnson called a bad sign.

“There have been announcements and calls for input, but we’ll see where it all goes,” she said. “I’m not sure how we end up in a place in 2015 when there’s 20-odd years of data pointing to how important sex differences are in health and disease and there’s not more attention to this across all fields, disciplines, journals, and so forth. No one wants to call it sexism but where else is it okay to ignore the basic facts? I think you have to wonder about that.”

• This article is part of a series about women’s health and chemicals.