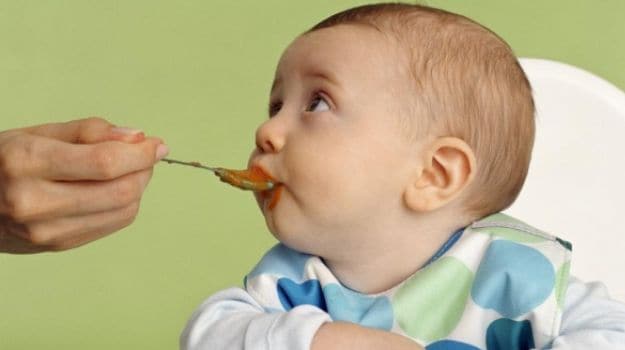 Feeding babies an assortment of vegetables when they are first weaned makes them more likely to enjoy unfamiliar varieties, according to new research.

Infants who were repeatedly offered a variety of vegetables during the first 15 days of weaning were more willing to try, accept and like new vegetables, research published in the British Journal of Nutrition shows.

There were three small studies: one each in the UK, Greece and Portugal. In the UK, the University College London (UCL) led the research, which involved 53 babies.

Participants were divided into a control group of 25 babies who were fed as normal and an intervention group of 28 where parents were asked to offer five different vegetables in rotation over 15 days. They were encouraged to offer a range of colours and flavours with a focus on green vegetables such as broccoli, peas and spinach, and told not to mix them together or with other flavours.

After this initial period, parents were told to introduce other foods as they normally would. Researchers then visited families and the babies were fed artichoke puree. Artichoke was chosen because it is not included in commercial baby food and is rarely eaten by children. Those in the intervention group were much more likely to eat more of the puree and were more likely to enjoy it.

Responding to the research, Sarah McMullen, head of research and quality at the National Childbirth Trust (NCT) said: “This study adds to others which show the importance of introducing babies to a wide variety of fresh fruits and vegetables. Food preferences can develop in very early life and getting babies off to a good start with healthy nutrition and eating habits can have lifelong benefits.”

Dr Alison Fildes, a research psychologist at UCL believes the advice new parents are given varies widely. She said: “It’s quite an anxious time when you are trying to get your baby to eat. The NHS recommends rice, fruits and vegetables but we actually found mothers were really receptive to receiving more structured advice.”

“The key messages that mums need to hear – and dads as well – is that it’s important to introduce a variety of vegetables, both bitter and sweet, early in the weaning process. Parents also shouldn’t give up. Sometimes babies need to taste flavours a few times before they get used to them.”

The differences in Portugal and Greece were not so pronounced. The control group in Portugal enjoyed the artichoke almost as much as the intervention group. “We think this is because in the control group most of the babies were getting vegetables anyway as their first food,” Fildes said. “What’s typical in Portugal is that mothers make their own vegetable soups and these are common weaning foods.”

She added: “Portuguese school children actually have some of the highest vegetable intakes in Europe and this might explain why.”

The UK doesn’t have as good a track record. A common practice, especially in commercial baby food, is to mix vegetables with fruit. Combinations such as broccoli and pear are given to babies but Fildes said this means they aren’t getting exposure to the vegetable taste. “In the short term they are more likely to eat it as it’s sweeter but they aren’t actually learning to like that food.”

Fildes conceded that the study didn’t look at whether the babies continue to like new vegetables when they reach the so-called terrible twos or even the dreaded teen years.

Justine Roberts, chief executive of Mumsnet said: “It’s worth noting that Mumsnet users relay that babies who happily eat 49 varieties of root vegetable still grow up into teenagers who eat nothing but bacon crisps and Frosties.”

However, she welcomed the research and said: “Weaning can be a head-spinner – as well as being the messiest thing that’s ever happened in your house – and lots of parents would welcome clear guidance on how to encourage lifelong healthy eating.”