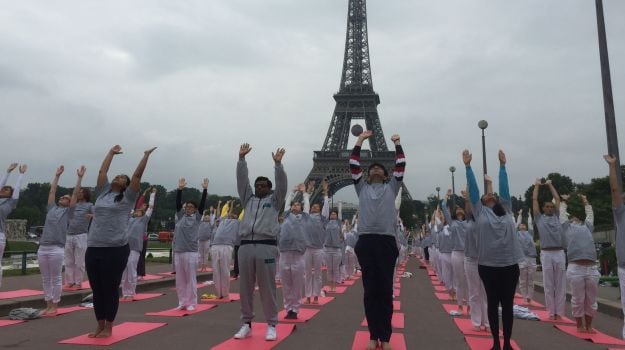 As part of the series of events to mark the second"International Day of Yoga", the Embassy of India in Paris organised an event at the iconic Eiffel Tower on Sunday.

The event attracted an overwhelming number of yoga enthusiasts but "due to space constraints and security reasons, we had to restrict the number of participants", the Embassy said in its Facebook page.

"More than 300 Yoga enthusiasts participated in the celebrations," the statement added.

The event commenced with a meditation session by the teachers of the Shivananda Yoga Centre in Paris. Speaking on the occasion, Indian Ambassador to France Mohan Kumar emphasised the importance of yoga for a healthy and balanced life. "I am glad to be part of this international yoga festival in Paris. It can be said that Euro Cup and Yoga Day are the most rocking events in France now," said Satish Reddy, Managing Director, World News Network who participated in the event.

Earlier on Saturday, another yoga event organised by the Embassy at the La Villette park in Paris drew more than 2,000 participants. The event commenced with sufi songs and traditional Baul song from West Bengal followed by meditation. "On June 21, more than 100 people will perform Yoga on board a boat in the river Seine sailing from the Eiffel Tower to Cathedral Notre Dame," the Embassy said in a press release.

Apart from Paris, the International Day of Yoga was celebrated with great enthusiasm in several cities of France, including Strasbourg, Nice, Avignon, Angers, Gretz, Samoens, Toulouse, Nantes, Gouvieux and in French overseas territories like Guadeloupe, Martinique and the Reunion Islands.

More than 7,000 people across France joined in these celebrations aimed at spreading the message of 'Yoga for peace and harmony', the statement added.