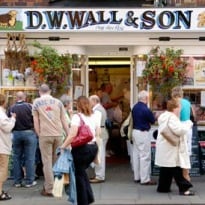 This autumn's mix of UK food festivals offers everything from insects to oysters, ales to mocktails.

BEST FOR secret dining
Ludlow spearheaded the modern food festival trend when it launched in 1995, and it remains one of the best. It is known for sausage and ale trails around the town, but there will be scores of other food-related events over the three days, many in Ludlow Castle. New this year is the Secret Restaurant, a five-course banquet at an undisclosed rural location; hands-on cookery workshops, including one on Egyptian cuisine; and SenseNation, an interactive event exploring how we use our five senses when eating.
• 13-15 September,£8.50 for a one-day pass, foodfestival.co.uk

BEST FOR a spectacular setting
A this weekend's free festival at 18th-century Holkham Hall, near Wells-next-the-Sea, there'll be lashings of locally brewed ale and locally reared meat, plus some more unusual fare: Norfolk saffron; fruit and vegetable "butters"; and quail lessons - meet the tiny birds and learn to peel their eggs.
• 31 August-1 September, free, northnorfolkfoodfestival.co.uk

BEST FOR witnessing a world record
The best day for foodies at this annual festival is 7 September, when there'll be a gourmet market, with goodies from more than 50 Northern Irish producers, plus cookery demos. The main attraction is the World Oyster Eating Championship. In the warm-up event competitors try to eat 30 native oysters as quickly as possible (record: 22.01 seconds). Then top eaters swallow as many oysters as they can in three minutes. Last year the winner managed a whopping 233.
•3-8 September, free, hillsboroughoysterfestival.com

BEST FOR insectivores
At the Liverpool Food & Drink festival local restaurants, bars and cafes have stands offering tasting plates or full meals. There will also be a food market, a chocolate garden and an insect-eating area. Smoky bacon mealworms, anyone? A beer festival will feature 50 real ales, 50 continental beers and 10 ciders; a spirit zone will offer masterclasses and a cocktail contest. Under-14s get in free and can try cookery sessions and foodie games.
• 7-8 September,£5 in advance, £6.50 on the door, £9 for both days, liverpoolfoodanddrinkfestival.co.uk

BEST FOR gory gourmets
Wales's best food festival has 250 exhibitors, five venues, 50 ticketed events, and a Festival Fringe. This year sees some intriguing tutored tastings: one simply called Blood, focusing on black pudding and other blood products; and one dedicated to the Bloody Mary (there are also lots of non-blood-related events). Food walks and talks include a chat with chef Magnus Nilsson of Fäviken, a tiny restaurant on the edge of the Arctic circle in Sweden. If you're busy that weekend, try the Conwy Feast (26-27 October, gwleddconwyfeast.co.uk, from £4)
• 21-22 September,wristbands from £6.50, abergavennyfoodfestival.com

BEST FOR haloodies
At the world's biggest halal food show, all food is suitable for Muslims and all drinks are alcohol-free - a professional mixologist will be demonstrating halal mocktails. Celebrity chefs cooking in live demos will include MasterChef winner Shelina Permalloo, Cyrus Todiwala of Café Spice Namasté and Michelin-starred Jean Christophe Novelli. Aimed at "haloodies" (halal-observant foodies), the festival will appeal to anyone interested in food.
• 27-29 September,£20, halalfoodfestival.com

BEST FOR food with a view
This festival at Balloch on Loch Lomond is part of Scottish Food Fortnight (7-22 September, scottishfoodanddrinkfortnight.co.uk). Cookery lessons include local and Punjabi cuisine; tasting sessions cover sausages, pies, ale and whisky; and suppliers include a smokery and a venison farm. Up the west bank of the loch is Arrochar, where there's a lovely foodie pub with rooms overlooking Loch Long (doubles from £85, villageinnarrochar.co.uk).
• 14-15 September, free, lochlomondfoodanddrinkfestival.co.uk

BEST FORdiscerning drinkers
Forget fusty Camra types: this festival is aimed at young, modern craft beer drinkers. It is held at Manchester's Victoria Baths (victoriabaths.org.uk) and will feature dozens of craft breweries from the UK and beyond, street food from Guerrilla Eats (guerrillaeats.co.uk) and live music and performances. Brewers will be on hand to serve the beers - a mixture of cask and keg - and answer questions.
• 10-13 October, from £6, indymanbeercon.co.uk

BEST FOR fish fans
Big-name chefs showing off their skillsat this festival include Mitch Tonks, Mark Hix and Thomasina Miers. Seafood will take centre stage, with fish nights and seafood lunches, and tips on filleting, smoking and crab picking. Other food events include a pudding and pie street party and a "spaghetti opera", and there'll be a host of workshops and talks, including a lesson in food photography. Drink events will include a Plymouth Gin masterclass and a mixology session.
• 25-27 October,main festival free, some events are ticketed, dartmouthfoodfestival.com

BEST FORfoodie families
Pretty Arundel, between the South Downs and the Sussex coast, is hosting a weekend of foodie events all around town. The free, family-focused activities include apple pressing and street cookery; allotment and orchard visits; bread-making over a fire and bake-off competitions; a secret supper club; and festival menus at local restaurants. At the new Arundel Museum (arundelmuseum.org) by the river, visitors will be able to sample food cooked to ancient Roman recipes.
• 19-20 October, free, arundelfoodfestival.org.uk