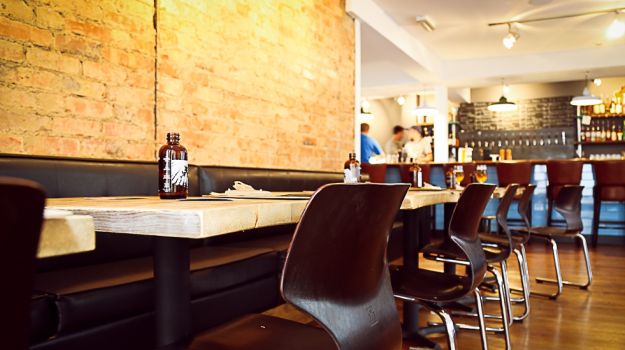 Raising the bar … Junkyard is as good for food as it is for beer.

Nottingham has contemporary art, compelling history – and cricket – and when you’re looking to refuel it also has a fine line in affordable cafes, delis and diners where you can tuck in for under £10 a head.

Somewhat hidden on Bridlesmith Walk, this superlative craft-beer outlet also serves unusually good bar food. A brunch of huevos rancheros and pancakes is a good start before an assault on its IPAs, as, later, might be shared charcuterie and cheese boards or small plates such as short rib in Baltic porter gravy or mac’n’cheese balls with arrabiata sauce. The best value is in its larger plates and, particularly, in taking them away, as you get 25% off. I lingered over a half of Cloudwater’s excellent spring 2015 IPA (£2.24, Junkyard has 15 keg lines), while the kitchen rustled up my Cuban sandwich: a serious stack of ham, salami and roast pork, topped with Swiss cheese, dill pickles and French’s mustard, served on (for once) genuinely lactic, grilled sourdough. It was £8.80 well spent.
• Brunch from £5, meals from £7.50. 12 Bridlesmith Walk, junkbars.com. Open Mon-Sat 10am-1am, Sun 11am-midnight

Every city needs an Edin Gondzic. At his deli-cafe (15 Broad Street) and latterly Edin’s Kitchen, the Bosnian restaurateur has repeatedly proven it is possible to deliver tasty, homemade food at knock-down prices. This eccentric space – its every available surface covered in junk shop bric-a-brac – serves glossy pastries, salads and sandwiches, as well as a global grab-bag of mains at around £7. For instance, gnocchi in a blue cheese sauce or Lincolnshire sausages with a spicy lentil and coriander stew. Everything’s a quid or so cheaper to takeaway, or you can opt for Edin’s set two-course £8.95 menu (£7.50 until 5pm). My slow-cooked spiced lamb tagine had serious depth of flavour and came with remarkably buttery, almond-threaded couscous. Edin’s has an affordable wine selection and stocks beers from local breweries Castle Rock and Welbeck Abbey.
• Takeaway, sandwiches from £3.50, meals from around £6. 15 Carlton Street, edinsnottingham.co.uk. Open Mon-Thurs 7.30am-7pm, Fri-Sat 7.30am-midnight, Sun 8.30am-7pm

Opposite St Mary’s Church amid the handsome architecture of Nottingham’s Lace Market, the Kean’s Head pub is a nice change from the glitzier bars in the area and a great place to eat. The bar serves sandwiches, snack items (including Hartland’s renowned pork pies) and platters, as well as more hearty grub, including pub classics and various filling and flavoursome hashes served on doorsteps of fresh bread. This is fresh, well-seasoned, scratch-cooked stuff, yet none of the dishes tops £10. Owned by local brewery Castle Rock, this spruce one-room pub is also one of Nottingham’s best cask and craft beer bars (pint from £3).
• Snacks and sandwiches from £4.50, mains from £7. 46. St Mary’s Gate, castlerockbrewery.co.uk. Open Mon-Thurs 11.30am-11pm, Fri-Sat 11.30am-12.30am, Sun midday-10.30pm

Yamas is a contemporary Greek restaurant: there are no plate-smashing antics; the music, a soundtrack of bouzouki-led folk, is discreet and laid-back; and designer rustic art and wooden carvings decorate an otherwise simple space. All the action happens on the plate, in a variety of tapas and meze which, between midday and 4pm, Wednesday to Saturday, cost £6.95 for three. Portions are very generous and the food, while not boasting much in the way of finesse, delivers big, robust flavours. A herby sausage (loukanika), sliced and fried in onions, had a rather chewy texture, like an overdone Frankfurter, but was curiously moreish. The stifado beef casserole, its tomato sauce fragrant with cinnamon and mined with tiny black peppercorns, is like meeting a friend’s jovial Greek uncle: it is a stocky, bustling, back-slapping pleasure.
• Lunch from £4.95. 5 Thurland Street, 0115 950 1000, yamas.co.uk. Open Sun-Tues 5pm-10pm, Weds-Sat midday-10pm

This wood-panelled room, at one time the Flying Horse Inn, is now Nottingham’s de facto third-wave coffee hub – the high-street face of a local, small-batch coffee-roaster. As well as a highly creditable flat white (coffee from £1.70), it is also a good place to pick up filled croissants, quiches and offbeat soups and salads, all prepared on site each morning. The sandwiches are not huge (for the money, £4.95), but this is a matter of quality over quantity. These innovatively filled flatbreads and sangers – BBQ pulled chicken, tomato, smoked cheddar; cauliflower cheese with chilli and spinach – certainly deliver on flavour. My braised beef baguette with mustard and emmental actually made effective use of one of food’s most egregious ingredients, red and yellow peppers. Fried to a sweet, melting fruitiness, they were a genuinely welcome addition. Who knew that was even possible?
• Light meals from around £4. 16 Flying Horse Walk, 200degs.com. Open Mon-Fri 7.30am-8pm, Sat 8am-7pm, Sun 9.30am-6pm

Oscar and Rosie’s at Das Kino

With its table tennis, graffiti-spattered photo booth and air of faded grandeur, the Das Kino bar is clearly trying to recreate a little East Berlin in central Nottingham. The food, however, is more New York than Neukölln. Oscar and Rosie’s – a separate restaurant within the bar – has thin-crust, stone-baked pizzas topped with high-quality ingredients, from (terrific) ham hock to butternut squash, and they have names such as Meat Sweats and Boom Chicken Wah-Wah. Personally, I prefer a Neapolitan slice (simple, wood-fired, classic ingredients), but this was nonetheless thoroughly enjoyable pie. Until 4pm, you can bag yourself a lunch-sized 9in pizza for £5 (£7 weekends), as well as various mac’n’cheese dishes and daily one-pot specials. Moving into the evening, a couple could eat here, splitting a 14in pizza and a big salad with a couple of small beers, for just over £20. Alternatively, take away and eat as you walk.
• Lunch specials, £5/£7, 14in pizzas £14. Das Kino, 22 Fletchergate, 0115 947 3132, oscarandrosies.com. Open Mon-Sat midday-10pm, Sun midday-8pm

It is a steep ascent up Derby Road to this real ale pub, but it’s worth the exertion – for two reasons. The Hand and Heart is built into a sandstone cave, hewn from the rocky slope it sits on, and it also does a solid line in affordable pub grub. It serves hot rolls (fish fingers and homemade tartare sauce, pulled pork and honey mustard etc), cheeseboards and snack items all day and, until 4pm, a set lunch that includes main courses at £7.95. The Hand and Heart’s rare, sweet’n’smoky bavette steak, served with a decent garnish of leaves and pickled radish, has to be one of Nottingham’s best bargains. The chips are an abrupt challenge to accepted wisdom, too: they are bought-in and fried on-site and – utterly crisp without, perfectly fluffy within – are miles better than most pubs’ attempts at homemade, triple-cooked chips. The pub’s eight real ales are well looked after (pint from £2.70), if a little traditional for today’s young, thrusting craft cavaliers.
• Light meals from £3.95, mains £7.95 (until 4pm). 65-67 Derby Road, 0115 958 2456, thehandandheart.co.uk. Open daily midday-11pm (food served till 9.30pm, 9pm Sundays)

This is Christian outreach work that even Richard Dawkins would struggle to quibble with. The Malt Cross is a one-time Victorian music hall – a partial glass atrium full of wrought-iron period detail – that has been refurbished by a Christian charity and is now run as a cafe-bar and arts centre. Its profits fund the upkeep of the building and the group’s street pastors, who offer assistance to distressed late-night revellers. Militant atheists may bridle at the subtext to all this, but you would have to look hard to discern any Christian messaging at Malt Cross. There may be a dedicated prayer room somewhere, but to most people this will simply look like a beautiful old building, which serves superb craft and cask beers (pint from £3.30), and great hulking piles of smoked meats – as sandwiches and salads. A super-soft brioche bun stacked with melting, hickory-smoked brisket necessitated a mopping up operation that required several napkins. Elsewhere, the menu includes several trad-pub dishes, a burger, fish and chips, bubble and squeak, at just under £10.
• Meat sandwiches £6, mains from £8. 16 St James’s Street, maltcross.com. Open Mon-Thurs 9am-11pm, Fri-Sat 9am-midnight, Sun 9am-9pm

Among burger fanatics, there are many purists for whom maximum beefiness is the ultimate goal. These people eat their burgers with minimal toppings and can tell you, in detail, the correct ratio of fat to lean meat and the precise blend of chuck, brisket, sirloin or short rib that will produce the finest all-beef burger. Annie’s American owner, Anmaria Spaziano, takes a more freewheeling approach. She makes what she describes as “authentic Rhode Island-style burgers” (85% beef, 15% pork, distinctively seasoned with smoked paprika), and is not afraid of outlandish toppings, from seafood sauce and king prawns to square Scottish sausage. I was a little sceptical, but my “German” – a well-charred and moist burger, topped with sauerkraut and American mustard – was highly persuasive. Little wonder this homage to rural US diners has been such a hit. Please note, not all of the Annie’s menu comes in below this series’ £10-a-head cut-off. There’s a choice of 10 burger and hotdog meals for under £10. Incidentally, if you love “dude food” and are a little short on cash, you may want to check out the £6.95, express lunch dishes at Red’s True Barbecue (11 Queen Street, truebarbecue.com).
• Meals from £8.90. 5 Broadway, Lace Market, 07463 033255, anniesburgershack.com. Open Sun-Thurs midday-11.30pm, Fri-Sat midday-12.30am

If you’re hankering after great fish and chips in Nottingham, it can involve a bit of a hike. Several miles out of the centre, in Wollaton, is the multi-award-winning Cod’s Scallops. George’s Tradition – again about three miles from the centre, in West Bridgford – may not enjoy quite the same glittering rep but it knocks out a reliably good fish supper and is actually more convenient – particularly if you are visiting Trent Bridge for the cricket or Nottingham Forest’s City Ground (they are 15 minutes away on foot). The menu at George’s, a small regional chain, takes in homemade pies, fishcakes and sustainably caught cod and haddock served in an admirably clean, light batter with genuine chip-shop chips. That is, chips that are a little chewy and caramelised at the edges, rather than shatteringly crisp, and that taste readily of freshly harvested potato. The tartare sauce, however, a sweet indistinct gloop, needs work. A good tartare, chunky with capers and gherkins, is a simple thing to produce and can transform good fish and chips, which these undoubtedly are, into a truly outstanding meal.
• Meals from £3.35. 95 Melton Road, West Bridgford, georgestradition.co.uk. Open Mon-Sat 11.30am-10pm, Sun midday-8pm

Travel between Manchester and Nottingham was provided by East Midlands Trains. For information on things to do in Nottingham visit experiencenottinghamshire.com

13 Cloud Kitchens In Delhi NCR You Must Try
Unlock: 10 Of The Best Home Delivery Options In Bengaluru