Bill Gates made the day special for his friend Warren Buffet by baking a cake for him, with a special surprise in it. Take a look at the video! 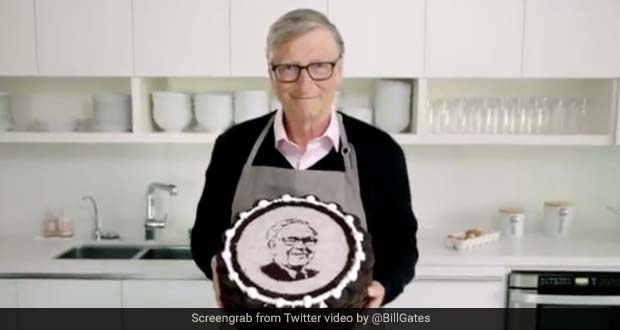 Bill Gates baked a cake at home for his dear friend Warren Buffet.

Bill Gates and Warren Buffet are both billionaires, owners of big business empires and are counted among the richest people on the planet. But did you know that they have also been the closest friends since thirty years? Warren Buffet rang in his 90th birthday on 31st August, 2020, and Bill Gates revealed in a note how he has been the number one contact on his speed dial after his wife Melinda Gates. Solid friendships like these are meant to celebrated, and Bill Gates made sure to make the day special for his friend by baking a cake for him with a surprise in it.

Bill Gates baked a delicious chocolate cookie cake, complete with a picture of Warren Buffet on top made with powdered cookies. He shared a video of the making of the decadent cake on his Twitter handle, wishing Warren Buffet on his 90th birthday. He also penned a heartfelt note to his close friend, "It's hard to believe that my close friend is entering his tenth decade. Warren has the mental sharpness of a 30-year-old, the mischievous laugh of a 10-year-old, and the diet of a 6-year-old."

Bill Gates further explained how Warren Buffet actually eats like a first grader at times. "He once told me that he looked at the data and discovered that first-graders have the best actuarial odds, so he decided to eat like one. He was only half-joking. Here's a short birthday video in honor of his dietary preferences," he wrote in the personal notes.

The homemade cake indeed did look drool worthy and kudos to Bill Gates for acing it! Here's wishing Warren Buffet on his 90th birthday and hoping for good health and happiness to come his way.