Sunny Leone Celebrates Her Award Win With This Chocolatey Delight

Sunny Leone posted a picture rewarding herself for a night well-spent, choosing to indulge herself in a chocolate treat. 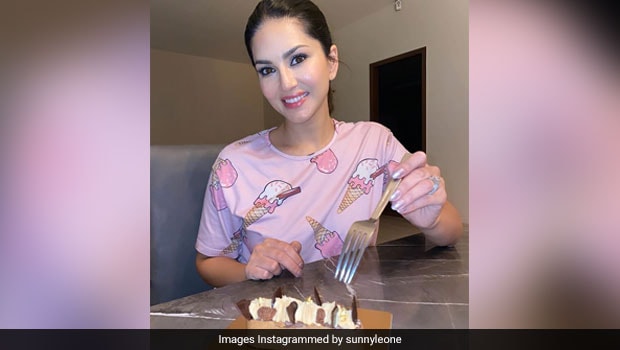 Sunny Leone rewarded herself for winning an award.

There's nothing like the joy of unwinding at the end of a hectic night out. After an evening full of glitz and glamour, there is the need to just spend a few moments alone and relax. Sunny Leone posted a picture rewarding herself for a night well-spent, choosing to indulge herself in a chocolate treat. Any guesses what she had? Yes, it was a simple chocolate éclair. Sunny Leone's decadent chocolate éclair had layers and layers of chocolatey goodness in it. Take a look at her post:

"The reward for the award! Diamonds...award...eclair...oh my!! Hehe. Insta Glam - Pic 1," wrote Sunny Leone in the post's caption. Sunny Leone was seen in her glamorous avatar in the picture, donning beautiful diamond jewellery in her hands and ears. She posed with her award for 'The Extraordinaire - Digital Icon' for the year 2019-20 awarded to her by Brand Vision. The chocolatey treat could also be seen in the picture.

That's not the only chapter in Sunny Leone's midnight food stories. Her next post was of Sunny Leone actually eating the decadent chocolate éclair. She had finally let her hair down after a very long night. Sunny Leone was seen in her home-style avatar, wearing pyjamas with ice creams drawn on them. She was all smiles as she held a fork in her hand, ready to devour the delicious chocolate treat.

"Now time to actually eat it in the proper attire! This one is reality - picture 2," wrote Sunny Leone in the caption of the second post, uploaded minutes after her first one. The feeling of indulging in oneself when you know you've earned it is an entirely different feeling altogether, and Sunny Leone aced it with both her glamorous and pyjama avatars. Kudos to Sunny Leone to satisfying her midnight cravings and rewarding herself for a night well spent!