Ready for Anchovies to Move Into the Mainstream? 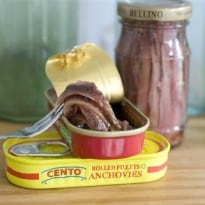 Maligned and misunderstood, anchovies have long been those stinky little fish that sneak into Caesar salad or top some adventurous person's pizza.

"My father would eat them out of a can," says New Orleans restaurateur and TV chef John Besh. "If Dad was going hunting, he'd grab a can of smoked oysters or anchovies and crackers and that would be his lunch."

But today, chefs like Besh have moved anchovies to the top of the food chain, showcasing them as elegant bar snacks, sophisticated bruschetta or the foundation for pasta dishes and stews.

"They make friends and enemies quickly," says Seamus Mullen, chef-owner of Tertulia in New York City. "A bad anchovy is not a good thing. It's a question of making sure you get the right ones."

Getting the "right" anchovies has become much easier in recent years. The mushy, salty tinned anchovies eaten by Besh's father are still out there. But more and more, the shelves of gourmet stores and upscale supermarkets offer high-quality anchovies preserved in olive oil, pickled in vinegar or sometimes even fresh.

More menus feature items such as "boquerones," white anchovies, often dressed with vinegar. Fresh anchovies might be cooked over a wood fire or dressed with breadcrumbs and garlic. Sometimes, anchovies go undercover. Besh uses them as what he calls "nature's MSG," melting them into beef daube and lamb stew to intensify the savory flavors.

Nick Stefanelli, executive chef at Bibiana Osteria-Enoteca in Washington, D.C., uses them to make an ancient Roman fish sauce called garum."One of the most classic pasta dishes is spaghetti with fish sauce, garlic and chilies," says Stefanelli, who includes the dish on his tasting menus. "The product itself really takes it where it needs to be... It's so simple and beautiful."

Anchovies have been a staple of Italian, Spanish and Provencal French cooking for centuries. French and Italian country stews use them to provide umami, a sense of meatiness and depth. They are made into marinades and tapenades, tossed into pasta and mixed with garlic, breadcrumbs and parsley to stuff vegetables, such as peppers and eggplant. In Spain, they are among the finest tapas.

Photo/AP: A recipe for orange anchovy tapenade over grilled endive.
"In Spain, you can go into any tapas bar and you'll see anchovies all over the menu," chef-entrepreneur Jose Andres said via email from Spain. "What we are seeing right now in the U.S. is a food revolution where people want to know more about food and so as that is happening people are becoming more and more open to new ingredients and experiences."

Not that you'll see anchovies in the fast food lane any time soon. But as more and better quality anchovies become available, they're likely to play a bigger role on supermarket shelves and upscale menus. But in the wider world, they may hang out on pizza and Caesar salad a bit longer. Which is not such a bad thing.

So here are some tips for embracing anchovies in your own cooking:

"Go for the ones in a jar," says Mullen. "The people producing them are proud of them." Mullen suggests topping a buttered rye cracker with an anchovy and a drizzle of vinegar. "The fatty butter goes a long way to temper the anchovy and gives it luxurious mouth feel," he says.

Cut up a head of cauliflower and boil some pasta, says Stefanelli. When the pasta is almost cooked, throw the cauliflower into the water. Heat olive oil, garlic, anchovies, raisins and pine nuts in a skillet. Drain the pasta and cauliflower and toss with the anchovy sauce. "Boom, 10 minutes you have dinner," he says.

Stuff zucchini flowers with mozzarella and anchovies, suggests Italian cookbook writer Michele Scicolone. Dip them in a light batter and fry until the cheese melts and the outside is crisp.

"Anchovies pair really well with fruit like a nectarines or clementine," Andres says. "The fruit complements the sweetness and saltiness of the anchovy." Cut the fruit into small pieces and top with a dressing or anchovies and sherry vinegar.