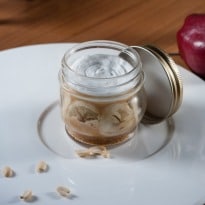 We often wish to break free from the noisy environment and enjoy serene tranquility for a while. The recently opened Fio-Cookhouse & Bar provides all that and freshness in terms of decor as well as food.

Located in Epicuria Mall, Nehru Place, despite the proximity to a metro station, the lush green decor and lounge music takes your mind off the hustle and bustle of the city life. The serenity will surely remind people of its branch in Saket - FIO Country Kitchen & Bar. The freshness doesn't end with potted plants stylishly placed inside the restaurant. I was told that some of the ingredients used in dishes came from their own nursery.

"We try to make everything on our own. Pastas are made here, even ice cream. We also get fresh herbs from our nursery in Saket," Vineet Wadhwa, owner and CEO of Fio - Cookhouse & Bar, told IANS.

Fio serves European and contemporary Indian cuisines. One is West and the other East, but Wadhwa believes there are similarities between the two, hence the combination.

"Italians and Indians eat like a family and both have cheese background and are wheat-eating countries," he said.

Executive Chef Ravindra Choudhary, who has worked with The Park hotel and Olive Bar & Kitchen in the past, makes sure that the two cuisines don't overlap and maintains the authenticity. Certain canned products, oil and the like are sourced from Europe.

The interactive yet not "in your face" kitchen and the list of dishes served at Fio made my tummy growl.Without wasting any time, I quickly placed my order.

I chose Dark Glazed Chicken Wings from shareable small plates section and Chilli Garlic Cheese Murgh Tikka from 'Straight from Charcoal Grill' part of the menu. The former was presented in a spectacular way. While the meat portion was placed facing the white plate, the bones touched each other on the top. The pomegranate added colour to the brown slightly tangy flavoured meat.

The tikka was unlike any tikka I ever had. It was creamy and had a strong taste of cheese. The appetizers complemented with dusky sunset mocktail which was essentially a spiced up guava juice.

For main course, I had Spaghetti Zucchini consisting of a good amount of smoked chicken pieces, which enhanced the flavour of the dish. From Indian section, I tried Lahori Murgh with steamed rice. It had a very homely feel to it. The meat was tender and the curry reminded me of mutton curry prepared at home.

I concluded my dinner by indulging in sweet sin. Fresh Baked 15 min Cake is something I highly recommend - the carrot with raisin cake when eaten with raspberry ice cream takes you to a completely different world.

Banoffee Jar is another dessert that will make you dig deeper and deeper. It has toffee cream, and caramel banana that simply melt in the mouth.

The menus are separate for day and night. The former is on lighter side with more focus on European cuisine and the latter gives a taste of the best from European and contemporary Indian worlds.

The menu is not fixed, but you can ask for contemporary Indian dishes such as Black pepper Chicken and Kalonji Paneer and from the Western menu you can take your pick from dishes like Ravioli and Risotto.

There will be a few additions made to the menu in the near future. As it's a fledgling unit, the makers of Fio are still testing and trying.

The Newest Entrant In Gurgaon - Madam Gusto - Takes You On A Culinary Expedition With Its Global Delights
Gujarati Food 101: Bite Into All Things Gujarat At 'Ba Ni Rasoi' In Garvi Gujarat Bhawan