5 Things You Didn't Know About Vodka 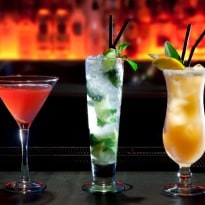 Vodka is a popular distilled liquor that is consumed worldwide. Poland, Belarus, Ukraine, Russia and the Baltic states are some of significant producers and consumers of vodka. In these places it is mostly drunk neat.

But there are many myths attached to this ultimate party drink. From being 'made of potatoes' to being considered as a 'tasteless' drink, it's time to get your facts right.


* Myth 1 - It doesn't matter which vodka you use in your cocktail.

Vodka is a rectified spirit with a soft simple taste. Vodka, which contains higher proof of alcohol, will bring out a different taste as compared to vodka with lower proof. A little known fact is that most vodkas that have a neutral taste and smell make the best cocktails.

Vodka by definition is a neutral spirit without any distinct character. Not quite true! The taste greatly varies depending on where they are distilled. The difference in taste of vodka also results from the quality and type of the raw material used, the distillation technique and the quality of the bottling. For instance, traditional vodka from Eastern Europe is assertive and robust and infused with a great flavor as opposed to vodka produced in America where it has a neutral taste.

* Myth 3: Vodka is odorless and tasteless.

Of course, different vodkas have different tastes and odors. Some are very light while some vodka brands are known for their oily character. Vodka gains its character from the grain source used to make the initial spirit and from the distillation process. One can grade different vodkas on the following four parameters- fragrance, flavor, feel and finish of the liquid.

* Myth 4: Vodka is made from only potatoes.

Promoted
Listen to the latest songs, only on JioSaavn.com
Contrary to popular belief, very little vodka is made from potatoes. Vodka can be made from any starch, sugar-rich plant matter or anything ranging from soybeans, grapes, rice, sugar beets and sometimes even sugar is used. Every country or region prides itself in their special way of making vodka.

Traditionally Vodka was considered to be a woman's drink. But today vodka is seen as a chic, hip and to-be-aspired-for drink by both men and women.