A Mouth Full of Crickets? Lobbyists Speak Up for Edible Insects 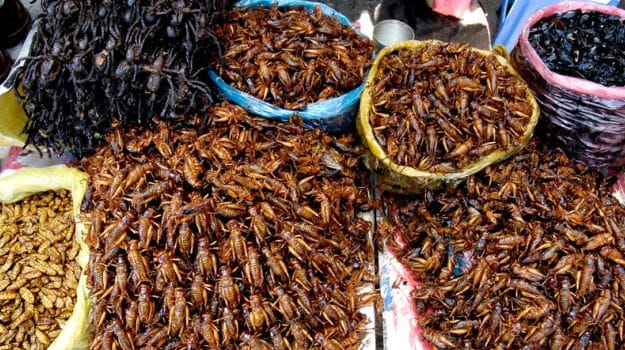 At the Oyamel Cocina Mexicana in Washington, metal butterfly mobiles hang from the ceiling and bugs are on the menu.

The chapulines tacos are jammed with thumb-sized roasted grasshoppers, a delicacy head chef Colin King cooks in tequila and chipotle puree and serves with shallots.

"There's a lot of instances when people try them for the first time where, if they can get over the mental aspect of it, then they end up really liking them," King said. "I know I went through that when I first tried them."

Connoisseurs of edible insects say more and more people are coming to like such dishes, which represent an untapped source of environmentally sustainable protein. And the industry is getting organized to push for further consumer -- and government -- acceptance.

At a conference of bug-eaters held in May in Detroit, the North American Edible Insect Coalition was organized. It plans to announce a lobbying campaign in a few months to convince the Food and Drug Administration to add mealworms, crickets protein powder and other insect products to the agency's database of Generally Recognized as Safe ingredients, or GRAS.

Someday, supporters say, bugs could be listed as their own food group, similar to seafood.

"One thing that the edible-insect community has really been good at is educating people about safety, but it is difficult to do so when the FDA doesn't acknowledge that it is safe to eat," said Mark Nagy, a member of the coalition and brand owner of cricket food company Incredible Foods, in Fort Worth, Texas.

As it stands now, the FDA allows the sale of bugs if they are raised for human consumption. Insect parts or additives can be found at specialty shops but technically aren't classified as food-safe ingredients because of their exclusion from the GRAS list. A company can seek GRAS status, which the FDA will respond to in about 180 days, said Washington-based regulatory lawyer Ricardo Carvajal, of Hyman, Phelps and McNamara.

The insect industry could "take a page out of the seafood industry's book" and grow through globalization channels and more prominent regulation, said Sonny Ramaswamy, director of USDA's National Institute of Food and Agriculture, who advised the coalition to start a lobbying group.

"Forty, 50 years ago, not many people that were not living on the coast were eating shrimp," he said.

"Now, you have people in Iowa eating Maine lobsters," he said. "You have to look at how the seafood industry has grown and think of the possibility."

The FDA identifies seafood-specific risks and publishes monthly lists of distributors certified to ship shellfish, which can help those skeptical of eating mussels and squid be more comfortable.

"There's no such documentation for edible insects, and it might help with the general public and manufacturers as far as eating insects," Nagy said.

When preparing and cooking bugs to eat, Ramaswamy said budding entomophagists should follow the FDA's Hazard Analysis and Critical Control Point protocol to prevent any microbial contaminants by thoroughly cleaning any insects.

Brothers Lee and Eli Cadesky, co-founders of edible insect companies C-Fu Foods and One Hop Kitchen, said they have had trouble finding food processors who will work with them.

"They say 'I don't know how my other customers will react if I'm handling insects' or 'I don't know what the FDA will say,'" said Eli Cadesky, whose companies make mealworm and cricket Bolognese sauce.

At the Detroit conference, a marketing research group reported that the two key factors holding people back from eating insects were taste and safety concerns, Nagy said.

Robert Nathan Allen, one of the leaders of the coalition, said in an email that the group is hoping for a public announcement in late August or early September on their lobbying plans. He declined to elaborate on them sooner.

Jim Richards, of Cornerstone Government Affairs, a lobbyist Ramaswamy recommended to the group, said he was contacted by a couple of individual edible insect groups earlier in the year, but the coalition has not reached out to him yet.

The coalition is a sign of progress for the maturation of the industry, Ramaswamy said. The edible insect industry is already so small that "it's not even a rounding error of the food Americans eat," he said. That makes a joint effort critical.

"Absent a collective or collaborative approach, I think the individuals in the industry will continue to struggle," he said.

Insects have a place in the American diet, industry advocates believe, and they hope to learn from the mistakes of companies they plan to compete with one day.

"Do we need regulators to clarify aspects of how insects can be used as a food or feed? Sure," said Allen, who runs Little Herds, an Austin, Texas-based edible insect advocacy group.

"Luckily, we have the benefit of hindsight and can avoid many of the pitfalls other livestock industries have run into as we build the framework for this industry to grow in."