A Quick Guide to Portuguese Cuisine 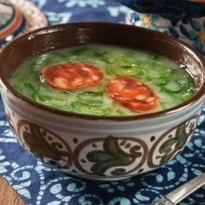 Next month, one of Portugal's best known chefs, Luis Baena, will open Notting Hill Kitchen, his first UK restaurant. While this will raise the profile of pastel de nata and salt cod across the nation, for those of us more used to Nando's (which is actually South African), it presents a steep learning curve. To help, we asked Baena to talk us through the highlights of Portuguese cuisine, which, he insists, don't include piri-piri chicken: "It's part of Portuguese cuisine, but it doesn't represent it. It's known abroad, but in Portugal we don't eat that much."

Salt cod is a staple in Portugal, eaten two or three times a week, in all kinds of ways, from baked with cream and potatoes (bacalhau com natas) to a cold chickpea salad (salada de bacalhau com grão-de-bico): "In Spain, Juan Mari Arzak and all those great chefs work with bacalhau, but are kind of humble when talking to Portuguese chefs, because they say: 'I can't speak with you about bacalhau, because you have thousands of recipes.'"

From stews cooked in volcanic geysers to this, the islands' magnificent strong, cow's milk cheese, aged for up to seven months, the tiny Atlantic archipelago of the Azores is, says Baena, "the key part of Portugal that people aren't familiar with. Cows live free in meadows all over the islands and the milk is fantastic. São Jorge will surprise the English: it's a unique cheese."

Black Iberian pigs, known in Spanish as pata negra, are reared on both sides of the border. In Portugal, the best come from the Montado region of Alentejo. Farmed in oak forests and fed on acorns, the pigs, like Japanese kobe beef, develop layers of intramuscular fat that results in a sweet, moist meat. In Portugal, pork is widely cooked confit-style, in dishes such as rojões, a northern favourite. At Notting Hill Kitchen, confit pork cheeks will be served with truffled bread and bacon crumble.

Lisbon red mullet, especially that caught in the waters off the village of Sesimbra (where it feeds on a particular type of seaweed), is a top Portuguese ingredient. "Fish is very important for the Portuguese diet and one of the things I'm going to promote is seasonality and varieties," says Baena. "During the year, we're trying 60 to 70 varieties of fish."

"People are familiar with port - in Britain, you have been the biggest importers for 100 years - but it's not the only wine. Portugal has amazing madeiras, moscatels, wines from Douro, strong Alentejo wines. I think vinho verde [young ,"green" sparkling wine, from Minho], will be appreciated here."

The quintessential Portuguese custard tart. "We are a nation of sugar lovers and everybody knows nata. Not only in the UK - in China and the Far East. That's one thing we're going to represent at the restaurant: my interpretation of nata, with a traditional taste but a contemporary presentation. It's so simple, but so good."

From tuna to octopus, tinned or preserved fish is huge in Portugal. Sardine roe is particularly prized: "For the Portuguese, it's a delicacy. It's a unique texture and flavour."

"This is one of those iconic comfort-food dishes you find in most restaurants and at home. We're talking about five ingredients: potato, onion, olive oil, kale and chouriço. It's as simple as that."

During the Inquisition, Jews created two pork-free chouriço that they could eat to "prove" their Christianity. They are now Portuguese classics. Alheira is a game chouriço and smoked farinheira, although it is sometimes now made with pork fat, was historically made with just seasoned flour. "Every Spaniard is crazy about that chouriço," says Baena, "particularly with scrambled eggs."